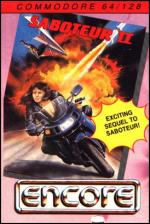 The Saboteur is dead! Long live the Saboteur! Or his sister, at least. Yeah, poor Sabby, after pinching the evil baron's computer disk, he was 'snuck up on' and take out in a most gross and grimy manner. Luckily, before his sudden demise, he had managed to train up Sis to near perfection. Thus with the power of ninjutsu at her fingertips (actually, all over her person!), off she trots to avenge the death of the one they called Saboteur.

The plan is to break into the baron's warehouse (under which the explosives are hidden), change the missiles' instructions, move off sharpish and keep the old head down while the firework show plays through.

On your quest, you will be attacked by huge robot guards with flamethrowers which you can remove from play using either brute physical force or, if you don't feel up to it, lobbing a brick (or other such utensil) at them. Dotted around the warehouse are lifts which must be activated at nearby terminals before use. And there's a motorbike to escape on, once you've primed the missiles.

So there's a lot going on in Saboteur II. Unfortunately, the game is so reminiscent of its predecessor that you feel you've been conned (should you already possess the former title). Gameplay and graphics are very close to the original, with sonics the only (minimal) improvement. If you don't possess Saboteur, or found it absolutely the best program in the whole world and want more of the same, get this by all means. I personally couldn't stomach the deja vu.

Gameplay and graphics are very close to the original, with sonics the only (minimal) improvement.