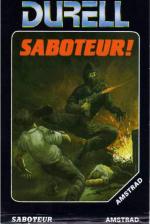 Another spin-off from the current fad of martial arts games. This one sees you as a black clad Ninja-type mercenary who has to steal a disk from an enemy complex filled with armed guards, rabid dogs and camera-guided anti-personnel weapons.

The game features you as a rather large sprite that can punch, kick, jump, use weapons, and do all the other things that you would expect from a game of this type. Though the animation during movement is rather good, and is certainly up to the standards that you would expect a martial arts game to have nowadays.

The game progresses from screen to screen - rather than continuously scrolling, which I think looks better. But we're stuck with the screen to screen to screen method. In each screen could be a baddie, who needs to be kicked to death, a useful weapon - a knife or half brick perhaps, or a number of other things.

So you fight your way around the game, and if you're lucky you will get to the helicopter to escape.

A reasonable game which is complemented by good graphics. The game itself has nothing new about it, except that it seems to be a mish-mash of other games and techniques. The large and detailed moving objects are good, as is most of everything else which is in perfect scale.

A reasonable game which is complemented by good graphics. The large and detailed moving objects are good, as is most of everything else which is in perfect scale.