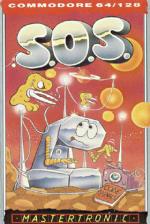 Sydney the droid has crashed his plane in the ruins of the main city on Alpha Five - and since you sent him in the first place, you'd better get him back.

Your task is to guide the stricken robot around the city complex, attempting to find the plane's radio which was thrown clear during the accident. Having found this, Sydney can go 'on the air' and guide the rescue team in to pick him up.

A flick-screen, forced perspective 3D view of the city is given, showing the pathways and features that Sydney has to negotiate. Unfortunately, the city is not as deserted as previously thought; there are still functional robots patrolling the grounds who eat the little droid on sight.

Sydney's progress through the city's pathways is blocked by obstructions, including computer terminals and barriers. These are removed by the logical application of objects that are found lying around - floppy disks, flags and coins can prove to be very handy.

Time passes rapidly on Alpha Five - the day is short-lived and the nights are very dark indeed. The display gradually darkens as the sun sets, and poor old Sydney can make little progress during the darkest hours. Once again, there are objects lying around to accommodate this, thus helping to make Sydney's task all the easier.

A display panel below the main window gives details of Sydney's status and a list of his current acquisitions. The unfortunate android starts off with three lives, and restarts from his present position when a life is lost.

Very few 3D arcade adventures work on the C64, so I didn't have high hopes for this. The playing area is so small that the scenery becomes confusing, and it's difficult to see where the paths lead - especially when you consider the colours involved (a horrible mixture of purple and brown).

The control method is one I particularly hate - rotate to face the right direction and then hop forward. S.O.S. isn't enjoyable, as there's a need to be too precise in your movements to make it playable. Even at two quid it's hardly worth it.

Initially I thought that this was really horrible, but subsequent play has caused me to amend my opinion slightly.

The control method is a little on the tricky side and can make things a bit frustrating, but it's an enjoyable game nevertheless, and it can get pretty addictive - especially when you start mapping things out and getting to now the ropes.

It doesn't look or sound at all impressive, but arcade adventurers should give it a whirl - it's not bad for two quid.

I must admit to not being overly enthusiastic about this type of game. However, S.O.S. is better than most I have seen and is really quite enjoyable to play. The city is very neatly displayed, being clear and uncluttered. The characters' animation is reasonable, and the effect of night falling is really good.

This won't be everyone's cup of tea, but at two pounds, it puts many similar games to shame.

Value For Money 72%
Plenty of depth for two quid.

Overall 59%
A slightly above average maze game, marred somewhat by the constant need to restart.

A slightly above average maze game, marred somewhat by the constant need to restart.