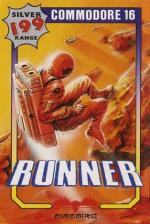 Fire up your jetpac, and head for the silver keys says this new entry into the Firebird silver range. Come to think of it, the bloke in this game does look rather familiar.

Runner is a new title, but it's a pretty old game. It's a platform game with the same boring routine, they collect objects. Keys in this case. But of course your task is hassled by the enemy - a weird lumpy thing - just to make it interesting...

On the first screen, I decided to fire up my jetpac and head on up, but I couldn't! Even though I had a mighty jetpac strapped onto my back, I couldn't fly straight up. How stupid can you get?

I quickly discovered that you could only move left and right when in the air, and that you still had to climb up stupid little ladders to get to the next platform. And then, as if that wasn't bad enough, I found I had a limited supply of fuel for my jetpac.

After collecting the three silver keys, which was quite easy, you progress onto the next screen, supposedly harder, which looks much the same, just more nasty things. In the end I cleared so many sheets I just gave up.

Runner is too simple by half for a computer game. Even noughts and crosses has got some challenge to it. Even though this game is only £1.99 I feel you are still being robbed. Take a look at other budget games and you'll see why.

Runner is too simple by half for a computer game. Even noughts and crosses has got some challenge to it.