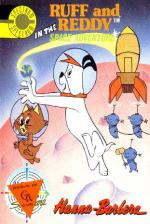 In this platform game translation of the Hanna Barbera cartoon characters, Ruff and Reddy have been kidnapped by the Lilli-Punies (great names, huh?) where they learn that some of the other Lilli-Punies have been captured whilst exploring a new planet. You have to earn Ruff and Reddy's freedom by rescuing said captured aliens. There are four areas of alien planet to explore, with twenty Lilli-Punies to rescue.

When all's said and done, Ruff and Reddy has a pretty uninspired game design, namely, go around the screens picking up bonuses. However, it's still quite nice to play and at least has appealling graphics. Not the greatest bargain ever, but a decent game nonetheless.

A fair platform game that should keep arcade adventure addicts happy for a while.

A fair platform game that should keep arcade adventure addicts happy for a while.