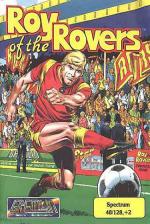 (To be read in the style of Norman Lovett)

Oh dear. Boo hoo. 80% of the Melchester Rovers five-a-side team has been kidnapped. That's four of the five players, if you hadn't already guessed. Nobby, Spunky, Tossy and Veiny have all been abducted by some evil criminal mind, and it's all down to one man to save them - Roy of the Rovers. Yeah!

Instead of going for the usual boring approach of trying to come up with a single decent game, Gremlin have, quite originally, gone for the rather odd approach of putting two very poor games together. Does it work well? Does it heck!

The first of the two games is imaginatively entitled Roy: The Adventure. This is the full-blown exciting escapade as you guide Roy around the streets of Melchester, talking, smiling and fighting with the people he meets. The game is viewed as a side-on scroller, with roads cutting through the plane of vision, both into and out of the plane of the screen. These streets can be moved onto by moving Roy in the general direction of the intersection and pushing up or down to move into or out of the screen.

A menu system is used to run the game in a method not unlike the GEM system used on the ST. A menu bar at the top of the screen has four choices, each of which can be selected via a certain key on the keyboard. Each bar brings up a different window, which does different things. Select the Extras option, and you can stop and chat or fight with anyone who may be standing near you, or simply smile at them, shown by a large, Colgatey gleam around the general vicinity or Roy's mouth.

Graphics aren't too bad for this section. The C64's graphics are far superior to the Spectum's due to the good use of colour and reasonable sprite definition. The sound is limited to some spot effects and tunette here and there.

Roy Of The Rovers is a pathetic attempt at both an adventure and a football game. Stick to Microsoccer or Emlyn Hughes' International Soccer if you're after something a little more footbally. As for representing the feel of the comic successfully, well, at least my finger won't go through the tape.

This is a pathetic attempt at a football game. Graphics are lousy, gameplay is slow and frustratingly unresponsive, controls are slack and the fun level is dangerously close to non-existent.