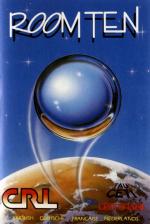 Ask anyone throughout the galaxy what "Room Ten" is, and they will tell you it's the room in any Galcorp Leisure Complex, reserved for the sport of low-level glyding. What do you mean you don't know what glyding is? It's a one or two player game, akin to a cross between tennis and squash, but it's played in a completely enclosed room with the players controlling the bats from the outside.

The ball bounces off the walls, ceiling and floor, and this is where the problem start. Since your bat moves very slowly indeed, you have to predict where the ball is going as soon as it leaves your opponent's bat, and then you have to move there.

The transparent bat is quite large, and through this the game is viewed. As the bat is moved the perspective of the room changes, giving a true first person 3D view. The main screen is split into two independent screens, each showing the view from either end of the room.

The angle at which the ball hits the bat plays an important part in the game, so once you have learned the physics, you can bounce the ball off the ceiling and walls, and really confuse your opponent.

Whenever you hit your opponent's wall, five points are scored. The same thing happens to your opponent if you miss the ball. The first person to score thirty five points is declared the winner of the game.

There is a large options menu which allows you to change the parameters of the game, such as the speed of the ball, whether there are one or two players, and the intelligence of the computer opponent if there is only one player. If you want to be a real rebel, you can also change the colour scheme of the game and the language of the instructions (Parlez-vous Francais?)

I can't see why so many people raved over the Amstrad version of this game. What's so special about Pong in a box? Nothing. You open the box and it stinks. A 3D Pong variant would be good if it played well. But Room Ten doesn't. Not at all.

It's far too slow and monotonous. I find it hard to believe that this dull and unoriginal game came from Pete Cooke, the designer of Tau Ceti. Ah well, even gods have their off-days. I think Pete designed Room Ten on the seventh day...

For a moment, when Tau Ceti was released, it seemed that things were changed; the lads from Vernon yard turning their backs on the naff games scene that made them. But have no fear, dross fans, Room Ten is admirably bad. A real corker of a rubbish game, and best laugh of all its £9.95.

Nearly a tenner for a game of near infinite tedium which - although trying to hide under the guise of Arcade Action - is as slow as it can go. Brilliantly rubbish and sadly pretentious, Room Ten totally destroys any credibility CRL built up on the Commodore scene with Tau Ceti.

Do not buy this, save your money.

What a pile of complete and utter rubbish this program is! When playing it, several words spring to mind. Unfortunately, they can't be printed. Plenty of words which can be printed also sprang to mind, and they include (to name but a few): shoddy, grotty and noxious. The gameplay is so awfully sluggish and slow, and it's about as exciting as watching park benches warp.

The graphics are bad too. The ball wobbles about like a balloon filled with water, and the line drawing is jerky. The sound is also pathetic. Even on two player mode, the game isn't much fun to play because of the speed at which everything happens. You can't even redefine the keys! Even as a budget game, it wouldn't be worth buying - for a tenner it's a joke, and for the punters a sick one at that.

Presentation 81%
Very well presented, but the keys can't be redefined!

Lastability 12%
The original Pong is more exciting - and a lot faster!

Value For Money 10%
There are other, cheaper, more impressive and playable Pong games available.

What a pile of complete and utter rubbish this program is!