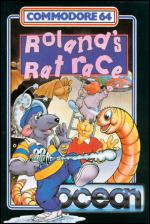 The scenario: Roland is late for work and his decrepit car won't start. So, being a city rat, he decides to go below ground and make his way through the maze of drains and tunnels to get there. To make things even worse, his two friends (Kevin the gerbil and Errol the hamster) have been caught by the nasties who've sworn to stop Roland from getting to the studio.

If Roland wants to free his chums and get to work on time, he must get past the blocked tunnel exit. To do this, he has to collect the nine pieces of door and take them to the exit. These pieces are randomly placed around 32 screens of pipes, drains, and tunnels (see panel).

Also frequenting the drains are pairs of wellington boots and a train. The wellingtons appear on all screens (except for the connecting pipes) and must be avoided or stopped momentarily by Roland's instant glue gun (activated by a quick press of the fire button).

This gun is also used to stop the train which runs along the bottom level. A quick spurt on the track when the whistle blows will stop the train. Climb aboard and Roland can travel the length of the lower level with speed and comfort. Should Ronald miss the train, though either lack of glue or bad timing, then a large quantity of energy will be lost as it runs him down.

Roland's energy is shown as a bar at the top of the screen and is continually diminishing due to his worry for his pals. Energy can be replenished, though, by eating one of the various goodies lying around (delicious blue, glowing hamburgers and apples. Blue!? Well, he is a rat.) The wellingtons too, deplete Roland's energy if run into.

Should Roland run out of glue (shown as a bar at the bottom of the screen), then he must find one or two spare packs lying around to replenish his supply. If he's not too careful where he squirts his glue then he'll get stuck in it for a while.

If Ronald collects all nine pieces of the door and the key to free his buddies, then he moves on to the final screen - the disappointing inner sanctum! This is a very poor finale, consisting of a single platform across the length of the screen. Roland has to run across this platform, avoiding two measly worms and electrically charged areas (both of which kill on contact but don't seem to if you quickly run across), to get to the other side to free his friends.

On doing this, the TV-AM theme tune is played and all three chums are transported to the surface on a lift. The game is restarted with no noticeable differences.

Both graphics and sound are very good. Roland and co. are all small but well-defined outlined sprites, and animation and colours are good throughout.

The playing area in Roland's Rat Race isn't exactly large, but it's quite easy to get lost to start with. It basically consists of an upper and lower level, each of 12 main screens containing platforms, ramps, and ladders. Some of these screens link directly to each other (via exits at the sides), others are also linked via separate screens of pipes which are accessed via tunnel entrances on the main screens.

The pipe screens are very simple, consisting of two or three pipes that run across the screen. But pieces of door and food are occasionally found on these screens.

Everyone's favourite TV-AM character appears in this good, but easy, collecting game. Great graphics and sound and a reasonable amount of challenge. This might be one for the kiddies: when you rescue your mates, the next level is no harder and therefore an experienced player could well get bored of it.

I found lots of really nice touches to this game, like the music, graphics, train, and overall task. The only thing that mars the enjoyment is the lack of lastability. I found I could crack the game with reasonable ease, and after that there is little worth playing on for. As with certain other Ocean releases, it seems there's lots of immediate appeal but not much to keep you playing for more than a few days.

The music irritated me at first, but I've now grown to love it. The game itself was interesting to start with, and it was tough work collecting the pieces of door, taking several games to actually reach the final stage. Once completed, though, it becomes rather boring to have to go back and do the same thing over again.

Presentation 72%
Interesting instructions and scenario but no options.

Originality 54%
Basically just a collect and drop game but with the infamous rat himself.

Graphics 78%
Roland must be proud of his animation and these sewers and drains look good.

Hookability 82%
The action is immediately enjoyable and addictive.

Lastability 63%
Suss economy on food and glue and the game becomes fairly simple.

Value For Money 71%
Great short term enjoyment although you may not come back to it after completion.

Sewers and drains look good... Great short term enjoyment although you may not come back to it after completion.