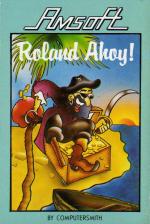 If you write a game with a character in it and sell it to Amsoft, he will immediately become Roland. In this game, our hero is a pirate, sailing the savage seas in search of treasure.

This is a manipulation game which involves quick thinking and responsive fingers. I found the keyboard control keys were set out awkwardly and that the joystick was not as easy to use as they keys. This left me in a quandry, but as both are active at all times you can change at will.

There are four screens; the first is the map around which you must steer to get ammunition. Loading is difficult as a cannon is fired at you as soon as you step off the ship.

When you get the shot you blast your way through the harbour boom to the treasure, avoiding yet more cannon. Finally you stash the treasure on the island, avoiding spiders and boulders.

In all, an interesting if rather static game which could do with a little more speed and interest.

An interesting if rather static game which could do with a little more speed and interest.