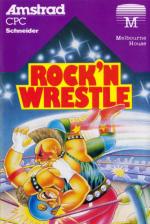 latest in the line of combat games, but there's absolutely no rock at all. The wrestling is very different from previous at-tempts at combat games because it has a large variety of moves and takes place in 3D. Those aren't just advertising claims to hype the game, but whether they make a good game is another matter.

The action all takes place in one wrestling ring where you can either take on the world's top ten wrestlers as Gorgeous Greg, or you can battle with another player to see who can inflict the most bruises The aim is fairly simple - to pin your opponent to the canvas for a count of three. Achieving it is a lot tougher because there are over 20 moves that can be performed and the computer opponents are quite skillful in their use of them.

Against the computer you have to battle past the 10 opponents, most of whom are insulting racial stereotypes in the same vein as those in Frank Bruno's Boxing. Each one has to be pinned to the floor within a three minute time limit without letting them pin you. otherwise you lose the bout. A win takes you on to face a new opponent who is more skillful and powerful, until finally you challenge the world champion.

The screen shows the ring with a crowd around it, and at the bottom of the screen are strength gauges for the two wrestlers. These don't determine the result of a bout but they do affect the wrestler's ability and recovery in some moves.

Most tussles are opened with a bit of softening up by both men using kicks, lifted knees and forearm jolts. The next step is for one of the fighters to grab the other, and from then on there are many different moves that can be performed. Most of these depend on whether you grab the man from the front, side or back, and at first can be difficult to string together successfully.

The confusing thing about most of the moves is the 3D nature of the game. Each move is performed by pushing the joystick or a key in a particular direction. The problem is that the directions change as the wrestler turns around the ring, and you need to pause in certain circumstances to work out exactly where you need to move the joystick next. Practice brings more familiarity, but you'll need plenty before being fully skilled.

When your opponent is on the floor he can be pinned down. If he has enough strength he may be able to throw you off; this depends on how much strength he has left. Many of the moves may get the man on the floor but the follow up is always crucial.

There are too many moves for us to tell you about all of them but amongst the more spectacular are the turnbuckle fly, in which you leap off the ring posts; the pile driver, in which you drop your opponent head first on the canvas; and the aeroplane spin, in which you whizz your opponent around before slamming him to the floor

The graphics are very well worked to produce the 3D effect, but it's often difficult to tell exactly what's going on. Not only is there a lack of rock but what sound there is is hopeless. The fight action has a fair bit of depth, with some interesting manoeuvres being possible after some practice. These are most fun with the two player option though, because the computer opponents can be beaten in a fairly predictable manner. It's certainly a very clever and de-tailed production but lacks really gripping gameplay and excitement.

If you find the game confusing at first, don't worry - it isn't just you. This one really takes some practice, and that 3D just makes things worse. Whether it's worth all that effort is another matter. Beat the computer opponents once, and I doubt you'll want to play the game again.

N. Computer opponents are fairly predictable.
N. Virtually no sound at all, never mind any rock.
N. Gameplay may be clever and detailed but it isn't very exciting.

Perfectly visible, and none of those garish costumes either.

Beat the computer opponents once, and I doubt you'll want to play the game again.