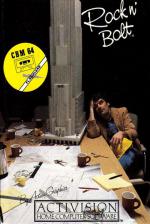 Oh dear! Another clanger from Activision. Ever since they got into the home computer market, the quality of Activision's offerings has dropped markedly. Rock 'N Bolt is a very simple game, but has some interesting logical puzzles as the game progresses.

The basic idea of the game is that you are a construction worker on a building site. Each floor is covered in moving girders (but just why they should move is beyond me) your character must leap between them and bolt them down, when they are bolted down he progresses to the next level.

There is some difference in levels, however, and on some he must follow a blueprint of exactly where to bolt down each girder.

On the easiest level, you have infinite lives, but on later levels you have a time limit and only a limited number of men.

On the practice mode I went through thirteen levels before falling asleep with boredom, on the 'real' levels with a timer, there is no increase in interest as you would expect, merely frustration as the timer runs out.

Not worth buying, get Ghostbusters instead if you want an Activision game.

Not worth buying, get Ghostbusters instead if you want an Activision game.