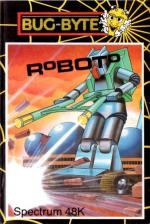 Oh deary, deary me. You know when you wake up on a summer ' s day and you see the good old yellow smiling face of Mr Sun looming through the window at you and you feel all happy and warm. Well, dear reader, come 2086, when you're about 115 or so years old, he won't be there any more. Oh no, he'll be a tiny speck in space, all cold and miserable and you'll have to huddle around your electric fires. Well that's how it is, according to the future predicted by the latest Bug-Byte game.

Poor old mankind is huddled together in thermal knickers in a ghetto surrounding the last operational power station. Now, big problems have occurred the station has started to malfunction and all the auto components are rampaging through the complex. With a power failure imminent you are elected to save the human race from freezing to death.

You see, you're the one and only remaining cyber-technician, the only person owning the ability to restore the power station to its proper working self. You're given a team of five working droids and are asked to deactivate all 51 sections of the station.

Roboto is a 51 flick-screen arcade adventure with arcade overtones. What the player has to do is to go round each of the sections leach section takes up a screen) and destroy the circular power orbs found there. Each room has two or more exits and are all linked to form a map. You can pass through a room without shooting the orb, but ultimately they all have to be destroyed. The droid can move in four directions and also has a limited supply of bullets for shooting the orbs and any nasties occupying the locality. Occasionally, shooting an orb gives the droid extra bullets, and they re certainly needed!

The journey through the power station is made hazardous by sliding doors, electrified walls and sparks all have to be avoided since one touch from any means the instant destruction of one of your five droids.

'Roboto is a very simple game, fun to play, it has nothing in it, however, to catch your attention. It's very much like the very early cheapo Spectrum games - simple and short-lived. All the graphics are much too small to have any decent effect on the game's presentation and the sound is nothing more that a constant and monotonous bun. The maze looks pretty boring as you move around it in a very wobbly fashion. Everything about Roboto is basic and it presents no really effective challenge to keep you at the keyboard or joystick for hou rs . I suppose this kind of game is alright for the younger users in the Spectrum market, but people who have been Spectrum owners for a time may quickly get fed up with this game'

'Roboto is a fast arcade shoot em up from Bug-Byte and so far they have produced some good games (ie Sodov the Sorcerer). Although some of the screens may take some time to pass it's fun and playable. Some screens contain weird objects which must be overcome in order to progress. The graphics are good and detailed and there is a wide use of colour on many screens. A jolly tune greets you at the start and gets you into the game. If Bug-Byte can keep up the standard of games like these, then they are on the way to some Smashes soon. Next time you get three quid go out and get it'

'Lots of colour and good graphics make Roboto reasonably attractive initially, but as you progress through the game, it starts to get a little boring. It's quite easy to start off with, and soon you find yourself flying through loads of screens 'with the greatest of ease'. For the price, it represents pretty good value for money, but it fails to have any really long lasting appeal, possibly because it's so easy. If you're a hardened zapparoony arcadian, it's probably not worth the effort, but it may appeal to some who want a simple, easy and attractive arcade game.'

May appeal to some who want a simple, easy and attractive arcade game.