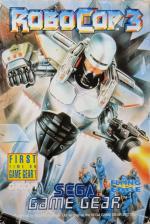 You know what to do with your inner city problems. Burn them down and evict the people. Replace them with a theme park or a drive-thru. To this end, OCP, corrupt corporation of Detroit City, are employing cyborgs to drive the undesirable elements out of the Metropolis. They send Robocop to assist in the operation, but the bi-pedal ben-pan comes over all social-workery and sides with the inhabitants. Now he finds himself caught between ungrateful thugs in singlets, SWAT teams and an array of computerised weaponry. Cripes!

Robocop came as one of the 'Goodies'; now he's fighting them. Goodies include bazooka-carriers, airborne robots, guided grenade throwers and armoured ground units. In general, the armaments of 'Goodies' are deadlier than those of the disorganised.

Splatterpunks have no regard for Robocop, and attack with handguns from all angles, including from windows of surrounding slums. The good thing about Splatterpunk attacks is they're quite weak and their weapons have a minimal effect on Robocop. However, mind out for the motorcycle squadrons who quickly turn Robo into rustbucket.

Unexpected help comes in the form of a broken-down ED-209. A computer whizz-kid rushes on to fix it, just in time for its forces to join you against an onslaught of bazooka troops.

Dredge as I might, I haven't got a whole lot to say about Robocop 3. It's a rather shallow game. Fair enough on the Game Gear, if it was fun - but it's not!

The graphics are okay, if a little drab, and the thumping tunes are some of the better examples of Game Gear music. But the game's too boring and frustrating.

Your large sprite is an unmissable target for most enemy fire, however fast your own trigger is. Coupled with the unimaginative level formats, it's a quick turn off.

It looks okay but it's a tired and tested formula which should have gone out with the ark. Don't bother.

Lastability 46%
P. Promises to be a tough nut to crack.
N. It doesn't inspire perseverance.

Pretty frenetic music for the Game Gear. But unrewarding gameplay means that Robocop suffers a fate worse than death - mediocrity.