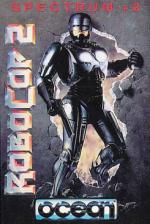 Robocop 2 | So How Does The Game Actually Work? | The First Lump | Scratchin'-Your-Head-Time | The Second Level | And The Third... | And That, Basically, Is That...

So, this is it. The biggie. I suppose the question on everybody's lips at the moment is "Is it as good as the original?" and the answer is... no, it's not. In fact, I'm afraid to say... it's better! Ha ha! Fooled you for a moment there, eh? (Nope? Oh well.)

There's more to it for a start (each level is bigger, and you can move around it as you like, rather than being forced along in one direction), there's more variety (lots of platforms and ladders and other 'interesting' gameplay elements), there're more between-level puzzley bits (and they're rather better too) - even the static shooting galley screens are improved. Oh yes, and it's all animated and put together in a super-snazzy and rather fault-free sort of way too.

Unlike most big licences, the Spectrum version of Robocop is actually a very different game from the Amstrad, the C64 or the 16-bit versions (which are, in turn, all different from each other), let alone the various console versions Ocean are working on. Apparently this is deliberate - some (like the console ones) are more straightforward shoot-'em-ups than the Speccy game (the thinking being that the average Nintendo owner is actually a good deal younger than the average Spec-chum). Speccy folk, they seem to think, are in their early to mid teens, meaning they'll enjoy a bit of mapping and some puzzle elements amongst the action - so that's what you've been given.

The bulk of Robocop 2 is, of course, your scrolling shoot-'em-up stuff. The first big chunk of it, set in empty warehouse, is a massive eight-way scroller. As before, Robo's walk and movements quite neatly capture the clunky look of the big-screen character, and he can still fire directly upwards or at angles too. Icons drop randomly from the top of the screen as he goes - baby food gives extra energy, a shield gives temporary invulnerability, 'T' gives a three-way firing gun, and 'S' the better scatter gun. For each of these you don't need to nip across the screen and jump on the icons - shooting them will suffice. Be careful though - there are also negative icons about that drain energy and perform other nasty things, as well as a rogue '?'' which can do anything, sometimes good, sometimes bad.

In this level, as in the other scrolling sections. the main difference you'll notice from the first game is the freedom of movement you enjoy - you can take any route you want around the map, and since the playing area is two screens high it also involves you in a lot of platform game-style jumping about (made especially tricky by the fact that half the platforms are actually moving conveyor bell jobbies!). On top of that, the whole thing is actually twice the size it initially looks as well, since at various points you can walk through doors in the background wall through into a second plane of action, exactly the same size as the first (but presented in a different colour, so you know where you are).

Right, once you've completed that it's into the puzzle bits. These occur twice in the game (between the main levels) and are (sort of) based on the early sequences from the film where Robocop is trying to regain memories of the man he once was. Taking the form of a cursor on a circuit board, you have to zoom around collecting the loose yellow chips - a task made tricky by the fact that you can only travel on the green bits, which are disappearing underneath you fast! Complete a handful of these boards and your scores are added up - do well and you'll earn some extra 'continues' for later in the game.

Straight after this comes the shooting range - a single-screen affair, but with more targets than its opposite number in the first game. With some rather pretty spot colour, and a neat representation of Robos targeting device, it's fun - and useful too. How well you do here directly affects how powerful your bullets are later in the game.

Right, moving along, and the second level's pretty much the same as the first, though with a different-shaped map and set in a brewery. There are some complicated bits (like the fact you have to swing over the vats of beer on a sort of overhead hook thing) and some very annoying little touches thrown in, the worst of which are the drips of alchohol which reverse your controls (so when you tell Robo to go left he goes right, for instance). This only last a few seconds, but can prove fatal - either learn to live with it, avoid the drips, or just make sure you get hit by an even number, so you'll come out the end of it with your controls as they should be.

Level Three is much more of a straight shoot-'em-up than the others. It's set in the OCP building. You have to work your way along eight floors up to the roof, but there's only really one route to take - along to the end of one corridor, into a lift, and then back along the next one. Ceiling-mounted rocket launchers. mini-ED 209s and an assortment of thugs get in your way, and occasionally simple logic puzzles (ie. complete the sequence: 56, 28, ?, 7 - the answer being 14) crop up when you want to access the lift to each new floor. Only at the top do you get to enter the back section of the screen, where you must fight to the death with the evil Robo 2, both of you crashing through each floor as you fight away, eventually hitting the street below.

So how does it all add up? Well, this is one of the few games Ocean have done in-house this year (whereas last Christmas most of them were), and it's by the same team who did Operations Wolf and Thunderbolt, so, as you might expect, it's pretty technically faultless. This is about as good as Speccy programming gets, with some very smooth scrolling, nice animation and so on.

Gameplaywise I'd say its one of the best film conversions Ocean have ever done too. I liked The Untouchables rather massively last year, but with hindsight the gameplay was perhaps a bit too bitty, each level (though all shoot-'em-ups) quite short and very different from the last. Here the levels are massive and retain the same gameplay elements, while managing to be quite distinctive at the same time. Perhaps a bit more variety between them in the backgrounds would have been nice, but then that's limited by the look of the film which seems to be 90% set in warehouses anyway. Certainly the clever platform sections make it a much more interesting game than the first Robocop - in fact, they're probably even better than the platform bits in Batman The Movie, which I thought had more or less set the standard for this sort of stuff.

Faults? Well, although I really like this practice of putting in smaller sub-games between levels I think it's perhaps more of a specialist taste whether you want to do little number puzzles right in the middle of a shoot-'em-up sequence (like the ones on the third level). The game isn't too tied to the movie plot either, but then that's no great fault - I'd much (much) rather have a playable game than a faithful (but useless) movie souvenir anyday.

This is about as good a film conversion as I've seen - indeed, it's about as good a shoot-'em-up per se as I've seen - and all the better for including some mapping and puzzle-solving bits rather just the straight shooting you get with, say, a console. There's no real point me recommending it (you'll all pick it up anyway) but, erm, I can't think how to end the review if I don't. So, erm, I recommend it. You won't be shortchanged. It's ace. (And I can't say clearer than that.)

Robocop 2 | So How Does The Game Actually Work? | The First Lump | Scratchin'-Your-Head-Time | The Second Level | And The Third... | And That, Basically, Is That...