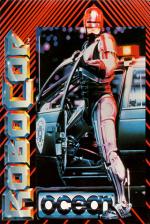 The time is the early 21st century. Crime throughout Old Detroit has soared to extraordinary heights, necessitating the takeover of the Police Department by OmniConsumer Products (OCP), allowing the company to place new peace-keeping robot systems in the streets. One of these systems is the ED-209 unit, a large bipedal robot with awesome firepower. The droid is set to take over the law enforcement of the city and eventually enter military service.

Dick Jones - the head of the project - is ready to show off the progress of the ED-209 and sets up a board meeting accordingly. Unfortunately, the prototype proves its unreliability by accidentally killing an OCP executive at the meeting. Fortunately, Bob Morton, another executive has a backup - the Robocop program. Soon a "volunteer" is found in the form of the late Alex Murphy, recently killed "in the line of duty"... in other words, set up.

Within three months, Murphy is back on the streets as Robocop with his three 'Prime Directives'...

Soon enough, he's back in action blasting criminals in downtown Old Detroit. After dispatching a crim who is holding a woman hostage, Murphy takes out a motorcyclist who for some reason stirs some memories.

Murphy manages to match up the identity of the biker with a gang-member responsible for a series of cop killings. This proves too much, and he sets off to avenge his "death".

His quest reveals connection with OCP he never thought possible, but problems arise when a certain part of his programming known as Directive 4 makes it impossible for him to carry out his law duties, so he must fight his way through and bring the people to justice, either via the law, or his own form of punishment.

Basically, there's lots of shooting, and some icons, like:

Ocean seem to have got the knack for recapturing the atmosphere of the original source for their licensed products, from Platoon, through Operation Wolf and now Robocop.

The whole feel of the game is a gloomy world filled with deadbeat criminals and killers, with your own character as a nicely futuristic looking figure made of shining metal (ooh, all rather poetic, dontcha think?)

It's a little bit on the difficult side (as Ocean games often are) but this doesn't damage the playability at all, it just makes you want to beat the c&$* out of the baddies just that little bit more.

As the saying goes, "I'd buy that for a dollar!"

Expectations ran high for this game, as Robocop as one of my favourite films, but when I heard that Ocean weren't going to convert the arcade game directly, I thought "Ooh, that's a bit odd".

Luckily, the decision has paid off - Robocop the game is grrrreat (to pinch a phrase).

The main sprite is very effective, looking very metallic and 'ard, but the backgrounds are rather disappointing on the whole, consisting of a few blocks to represent walls.

They do get better though, as on level three they're rather good. The sound on the other hand is pretty naff all the way through - repetitive tunes and weedy effects - and is soon annoying.

Still, never mind that, the game's really good, so play it *today*!

A 16-bit version of this brilliant game is expected any day now: the game's the same, but the graphics should be nothing short of amazing. Price? £24.99

Presentation 78%
Good on the whole, but there are a few annoying control quirks and delays.

Graphics 81%
Good sprites and animation, but some of the backgrounds are a little bland.

Lastability 88%
It's tough, but it'll keep you hooked - not bog you off.

Overall 89%
An atmospheric interpretation of a great theme.

An atmospheric interpretation of a great theme.