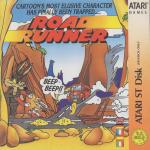 Beep, beep! It's nail-biting. It's beak against snout. Road Runner has swapped the cartoon canyon for the computer trail in an effort to out-fox that peril of the road, Wile E. Coyote.

All you've got to do is pick up the seeds and lemonade bottles on the desert road but, as always, that long-eared enemy of yours is close by with knife, fork and a host of impromptu gadgets to bring him even closed to fricaseed bird and french fries.

The seeds maintain Road Runner's hectic pace, and if he misses five of them he'll not only fail to gain important points but also faint from malnutrition and lose a life. Lemonade is also invigorating, but if you stop to drink it you'll spend several valuable chase seconds drinking it.

Road Runner runs at twice the speed of Wile E, but the Coyote has a skateboard, rocket, jet pac and pogo stick stashed on levels two onward to dwindle the distance. He'll also lob sticks of dynamite at you when he finds them scattered on the road.

If you make the mistake of being hit by dynamite, or winded by one of Wile E.'s contraptions, you lose another of your five lives and get blown back to the start of the current level.

Wile E. doesn't have it all his own way, though many of the natural dangers along the road can trip you up as well as the Coyote. At the start of the game, when the road is wide enough for traffic, you can try and lure him in front of a passing truck or boulder and force him over the side of a crevasse. You can also dip your body in invisible paint and disappear for a few seconds while you complete the current level.

The most hilarious part of the game - apart from watching Wile E. ride a rocket - is when the Coyote gets frazzled by a mine. It's the exact picture of the cartoon series. Wile E. stands blackly against the landscape, whiskers wilting in the noonday sun while Road Runner, hopefully, makes his escape. But, be wary, 'cos Roady can suffer the same fate and, if Wile E. does succumb to a blast, don't stand too near him - he'll recover in a fleeting second and continue the never ending chase.

Despite the last warning, Roady can score points by running close to Wile E. and sticking his tongue out before running away. You run the risk of writing your dinner ticket but, if luck's on your side, you could scoop up 100 cheap points.

Road Runner scores all the way as a game - although the Atari ST price is a little steep. The graphics are of superb cartoon quality, although Roady and Coyote are a little stickish, and each level has its own cartoon time soundtrack. Added to that, the tasters at the beginning and end of the game, which you may know from the original cartoon titles, show the ST's potential.

So, what else can I say? That's all folks!

Road Runner scores all the way as a game... The graphics are of superb cartoon quality.