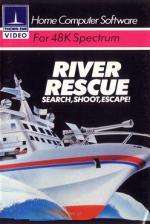 River Rescue is a kind of waterborne Scramble/Penetrator game.

You have a bird's eye view of a river and its banks which scroll across the screen. Your task is to pilot your motor gun-boat avoiding islands and crocodiles.

If you manage to shoot the crocs you gain points; if you hit them, you sink!

Every now and then you have the opportunity to collect explorers from the north bank and deliver them to the south, and gain more points.

The more explorers you collect, the more the program offers extra scoring facilities; get really good, and two planes start to bomb you in addition!

The game is incredibly fast and furious, as there is no skill level adjustment, which I rate as a disadvantage.

There are other snags too: the boat tends to crash when it's near an obstacle rather than being in contact with it; the animation is rather crude and the sound dull and repetitive.

I suppose I expected a large company like Thorn-EMI to produce a program which was technically superior to those of the small software houses.

The question must be asked: are you paying an extra pound or so for a flash inlay card and large corporate overheads?

Incredibly fast and furious, but there is no skill level adjustment, which I rate as a disadvantage.