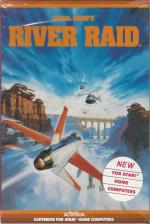 Activision, the people best known for their cartridges for home video games centres, have made a brave step into the world of computer software with a conversion of their popular River Raid war game.

If you've not seen the game before, here's a brief rundown of the scenario. You control a jet fighter flying at low level along a river basin - blasting enemy cruisers, helicopters, hot air balloons and jet planes.

You also have to destroy bridges - and the number of these you destroy tells you just how far you are up the river - and how good a pilot you are. Tanks cross the bridges and you can score extra points if you blast a bridge complete with tank. In later stages of the game, tanks shoot at your low-flying jet from the riverbanks, while helicopters fire homing missiles.

Early in the game, all the enemy planes, ships and choppers remain static - but they soon start moving back and forth across the river, so you'll have to dodge them or blast them.

Oh, and another thing, the contours of the river change as you fly along - and some of the narrows are *really* narrow - believe me!

This may be a river of no return - but you still have to refuel your jet fighter. You do this by flying over enemy fuel dumps and getting tanked up! When your fuel is running low, a nasty alarm signal bleeps from the computer - that's if you haven't already noticed that you are running low from the on-screen fuel gauge.

The graphics are slightly more detailed than the original VCS version - with mountains on the river bank - and it has additional hazards built in, like the hot air balloons and tanks. But it's just as addictive and challenging!

The graphics are slightly more detailed than the original VCS version - with mountains on the river bank - and it has additional hazards built in, like the hot air balloons and tanks. But it's just as addictive and challenging!