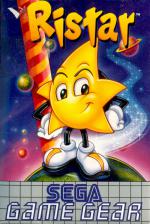 Traditionally, Hollywood is the place to hang around in if you want to become a star. Day or night, you can guarantee that downtown LA will be full of nubile young wannabees - all high on hope and without a chance in the world. But there's a place that's even more competitive than Hollywood, and the stakes are about four times as high. And it's just down the road from LA's stamping grounds too.

Yup, in Silicon Valley, hopefuls are striving to hit the big time as young as six months old, and the scary thing is that by the time they're around three or four, their careers could be over. Like forever. And then of course, they're stuck with names like Dynamite Headdy, Bubsy and James Pond and subjected to ridicule for the rest of their lives. But budding young Ristar has on advantage over all the rest - you see he's already a star. No, I mean he is a star. Really.

If you stumble across some doughnut-esque rings on your travels, don't ignore them in your hastiness to travel ever-right. Ristar can swing on these discs and if he does it for long enough, he goes all sparkly. This turns him into a sort of superstar, and by letting go of button two, he'll promptly whizz all around the level. Sometimes you'll need to do this simply to get through a level, but if you use the buttons to propel yourself higher, you'll gain a height bonus at the end of each stage.

Ooh Ristar, you're so-oo good aren't you? Not only can you scale walls, and generally swing yourself all around the shop, you can use your special extendable arms to dispense of any of those cheeky woodland creatures. Want to get rid of that nasty blue blob that's blocking your way? Simply grab hold of him, bash him against your bonce and he's gone. And you can, like, interact with the scenery too. Yup, Ristars can use his arms to hold on to floating flowers and other such airborne devices, which hopefully take him to previously unreachable areas of each level.

Blimey, this is closer to the 16-bit game than I would have thought possible. Granted, the stages aren't quite as busy as those of the original, but this is a fine conversion and no messing. On the Mega Drive, Ristar is destined to get lost against the Sonics of the world, but on the Game Gear Ristar is more than average - and certainly better than Triple Trouble. It doesn't offer anything new, but it has the playability and more than enough stages. Smart.

Even though Ristar borrows almost all of his features from Sega's past platform heroes, Sega have certainly made a huge effort to ensure that the graphics and gameplay are of top quality. Almost all of the features from the Mega Drive version have made their way onto the smaller screen, and it's these features that make Ristar slightly more appealing than the usual Sonic clones.

And unlike most of its rival handheld games, there's plenty of levels and the gameplay is quite challenging, too. Admittedly, the concept is derivative of almost every other platformer going, but it's still damned good fun and the graphics will certainly give haggard-looking handhelds a bit of a facelift.

Graphics 90%
Some of the best sprites to grace the Game Gear. Oh yes.

Lastability 76%
The password system was a big mistake... it makes it far too easy!

Value For Money 79%
Not pricey, but the Game Gear does have rather too many platform games.

Admittedly, the concept is derivative of almost every other platformer going, but it's still damned good fun and the graphics will certainly give haggard-looking handhelds a bit of a facelift.