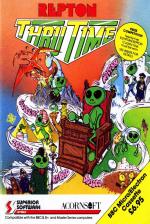 Our little green friend is back again in a new set of forty screens. Repton Thru Time covers various periods of history ranging from prehistoric and Egyptian, through Victorian, the present day and into the future. All the screens are Repton 3 standard and will load into any version - but you get the game and screen designer as usual so if you haven't any of the earlier versions you don't need to worry.

You start up with the prehistory screen set where Repton is wearing an animal skin and searching for the ultimate invention - the wheel. On his way he eats the green berries and avoids the red ones; the dinosaurs need crushing by the unaltered boulders. Spirits have become pterodactyls and seek out their caves before turning into berries.

The first screen was nice and easy, reminding you gently of all the usual Repton tricks - but don't make any mistakes because you can only get out of the start area once before it becomes blocked. Repton moves next into the Egyptian period with very brightly designed characters.

The first screen has an original start with two wicker baskets at either side of Repton falling and opening to reveal serpents. It certainly grabs your attention.

The spirits are now mummies seeking out their tombs. The rest of the screens are occupied by pyramids, scorpions and scrolls which you need to collect.

The next set of screens cover the Victorian era. The character designs are less clear with Repton in a frock coat and most of the supporting blocks being gaslights.

There's a little social comment since the creeping fungus is represented by smoking factories. But again there's a nice easy run at first with a good stiff gradient as the screens progress.

There's another tricky start in the present day screen set. The usual Repton key is represented by the Excess card of which there are two next to where you start. There are no diamonds (cans of coke) available and no boulders (suitcases) to shift); all you can do is collect the cards - and take a really good look at the map before you do.

The monster has become a traffic warden and ale houses are the safes, spirits are represented by flying newspapers, which don't seem to quite fit with the rest of the screen concept.

The final set of screens is called Future and they are really hard. Empty spaces and earth are now stars, whereas skulls and fungus are black holes. Time capsules look like teleports and are called timewarps.

The first screen would be easy if the characters were anywhere near normal - but as it was it took me ages to finish.

Pushing around the robots was easy enough, but you can't tell at a glance how they are being supported. Out of crashed spaceships come the BEMs - bug-eyed monsters - spirits are a different type of alien which convert Tie fighters into crystals, and if you grab a laser gun Daleks get challenged too.

This Repton group of screens is reputed to be the last that's going to be produced. I wonder...

This Repton group of screens is reputed to be the last that's going to be produced. I wonder.