Published in The Micro User 7.01 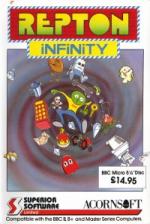 But before lashing out with the games creator, you should play the four games provided. Each is similar in that the screen scrolls left, right, up and down, as the respective heroes make their way through acolourful maze of intricate puzzledom.

In the first, Repton 3 Take 2, you amass as many points as possible by collecting crowns and diamonds and killing monsters. The usual eggs are scattered about ready to hatch into irksome green monsters. More difficult to shake off are large blue floating asterisks, or spirits, which have to be guided into cages where they metamorphose into diamonds - much more congenial.

Teleportation can speed things up a bit, but it is advisable not to use this facility too soon as you tend to find yourself in dead ends or spirit dens with no apparent way out.

The third game - Robbo - is graphically a little more stylish and the gameplay is distinctly more demanding - Repton's spatial puzzles supplemented by a number of tasks like illuminating a light bulb, putting a can into a fridge or mowing a section of grass.

The final game is Trakker which presents a bizarre scenario with you taking the part of a JAFFA - Jagga Annihilation and Fruit Flinging Associates - driver. Indeed there is a great deal of squidging and squelching as you drive your bulldozer over any tomatoes which get in your way. Bananas, as you well know, are lethal weapons and can be used for crushing Jaggas. Approach from behind, otherwise the Jagga will transform itself into agreen tubular spider.

You are accompanied by Kevin - a bit of adynamo when it comes to dynamite - and you will find the game can be quite explosive by placing him near sticks and then driving over a detonator.

The real joy of the package lies not in the game itself but in what the game creator enables you to do - apart from design the four other games on the disc. True, it confines you to Repton-type adventures, but there is a great deal of room for inventiveness.

The package takes out all the hard work that normally goes into the creation of agame and is a far cry from the editor usually supplied with the Repton games.

The creator is split into four distinct parts. Three are editors which enable you to work on the different elements of a particular game and the other links them to form a coherent game. The first stage is the screen designer, and here you can create a landscape for your sprites to inhabit. Anyone who has used a graphics utility will find this extremely easy to handle. Various blocks of pattern and colour displayed at the bottom of the screen can be used to fill areas of the main screen.

Similarly, you can go to the second of the programs and design your own sprites pixel by pixel. It's simply a matter of choosing an existing character and modifying it or creating something new.

The third program is perhaps the most difficult to use and a careful reading of the manual is necessary. The programming system which has been developed is called Reptol and is similar to Basic. However, the commands have been greatly simplified, so that only the essential ones are given and you do not need any prior knowledge of programming. Here you can bring your game to life, animate your sprites randomise movement, create objects and produce sound effects.

Once all the hard work has been done, the final step is to link the files you have created using the File Linker facility. This is simply a matter of keying in the appropriate file names so that your game is ready for its first showing.

Repton Infinity would be excellent value for games alone, but you can have much more fun by experimenting with the same creator. You won't be disappointed.

Repton Infinity would be excellent value for games alone but with the creator too... you won't be disappointed.