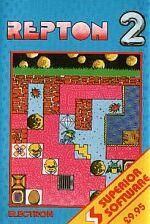 Reviewing Repton 2 now (albeit on the Electron) is like turning up at the party after it has finished. Everyone who could have reviewed it already has, and anyone who was going to buy it bought it long ago. Also, I am informed, it has already won the Game of The Year Award for 1985. So what can your humble reviewer say that has not already been said?

All you have to do is to move a green froglike creature up, down, left or right along various corridors clearing soil, running into boulders and not getting vaporised by so-called spirits. Also, there are monsters which burst out of eggs and you have to get the boulders to drop on them.

You reach the other sixteens creens by walking into more colured boxes, which also provide a useful escape when being cased by sea shells, sorry, spirits.

This game is a puzzle rather than a bug-zap. The trick seems to be to try to remember what happened the last time you moved that particular boulder. You win when you have collected thousands of bits of soil and diamonds and jigsaw pieces and also killed all the monsters and used all 64 transporters.

I didn't win, my three lives kept getting wiped out. What you should know is that the auto-destruct is not the dead give-away they tell you. What matters is to keep a sense of proportion, and try to forget the hair growing on the back of your hands.

All of which will make it completely obvious why this game was the Game of the Year. That, and the fact that, for Electron owners at least, you do not have to hack off your Acorn Plus 1 expansion to get it to work, though it is smoother if you do. Talking of smooth, where's thair hair remover?

You win when you have collected thousands of bits of soil and diamonds and jigsaw pieces and also killed all the monsters and used all 64 transporters.