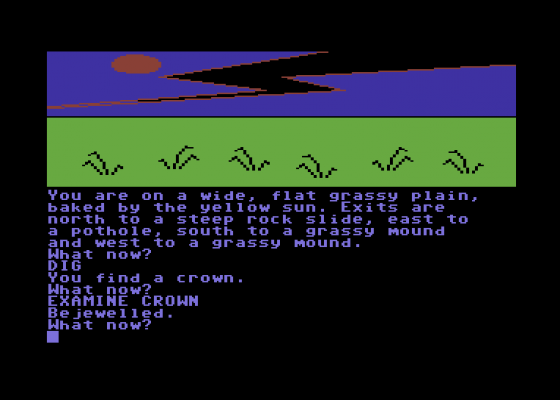 Adventurers everywhere will be sneaking up on their piggy banks, hammer in hand, with the news of a new release from Level 9. Having not enjoyed their last game quite so much as their others, I was also waiting with some trepidation to see whether or not they had returned to their usual standard. I need not have worried.

In olden days when the moon was red, magic worked and mythical creatures roamed the earth. As the colour drained from the moon, so too did man's magical ability. A red moon crystal was created which cast its aura over the Kingdom of Baskalos and all was well until the crystal was stolen. Red Moon is the story of how you, a magician, rescued the crystal.

Level 9 have made two major changes to their normal adventure system with the introduction of magic and combat routines. Throughout the course of the game, you will come across several characters who seen quite intent in stopping you in your tracks and attack you quite happily. You are assigned 50 hit points at the start of the game and these decrease as your opponent knocks chunks out of you. 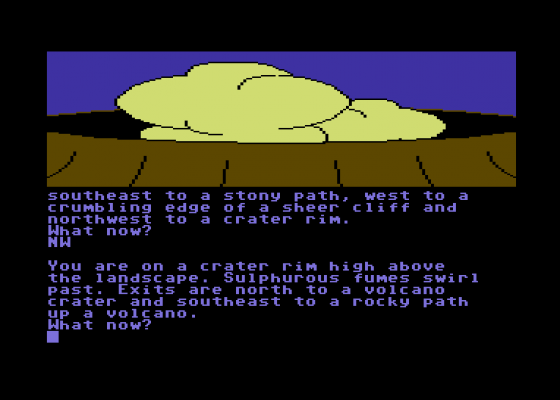 When your hit points reach zero, you die although the powers that be may decide to resurrect you. You are of course allowed to retaliate and as combat usually results when you meet another creature, it might be prudent to get in the first blow. Before you take this strategy as gospel though, a word of warning, some characters are supposed to help you.

The amount of damage caused is calculated on a random basis so that you can never be sure that the game will play the same way twice in succession.

There are a dozen or so spells listed in the instructions although there are also some magic words which are not listed. To cast a spell, you need a specific object to act as the focus of your attention.

For example, to cast a Zap spell (a magical attack spell) you need the dagger, but be warned, this spell won't work if there is too much metal around. The use of these focal objects makes life very interesting indeed as you can only carry a limited number of objects at any given time so you will not be able to cast all the spells that you know. Amongst the spells that you have available are one that reverses a fall, a teleport spell, detect magic and a temporary strength spell.

The first instruction given in any book on how to play adventures is "make a map". Alas, some people do not find this the easiest thing in the world to do. To make things easier for you, Red Moon tells you where the various paths lead to. For example, instead of saying exists are north and west, the program might say you can go north to T-junction and west to a large cave. You should have little trouble joining up all your bxes when making your map.

The game features over two hundred locations, all of which are illustrated (except in Atari and Memotech versions). The pictures are reasonable and are drawn fairly quickly. Text only freaks can toggle the pictures off.

All the locations are thoroughly and well described. One area on the surface is full of small slits and the whole place reeks of dragons. This is a lovely description and gives a reasonable hint as to what you might expect to meet later on in the game. It is also an easy game to explore. Well over sixty locations are accessible without having to solve any very difficult problems. This is an important point as it helps the player get into the atmosphere of the game.

With the introduction of magic and combat, adventure games an getting more and more like role-playing games (such as Dungeons & Dragons) with every new release. Red Moon is thoroughly enjoyable game with lots of atmosphere and interesting original problems. It maintains Level 9's position as Britain's number one adventure house.

A thoroughly enjoyable game with lots of atmosphere and interesting original problems.