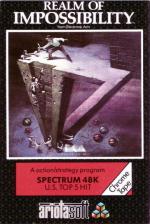 Realm of impossibility is a one or two player arcade adventure where the object of the game is to enter thirteen different dungeons and recover the items that are found therein. The front end of the program presents a menu when it has loaded and once the one or two player option and level of difficulty (1-4) has been selected, it's time to move to the dungeon selection screen. The thirteen dungeons are presented in a menu and when you begin play some of them are 'locked' items from other dungeons have to be collected before you can enter them.

Select a dungeon, load it from tape and the quest can begin. The playing areas are presented in a scrolling 3D format and each occupies several screens. As can be expected the dungeons are far from empty, and a variety of unpleasant creatures live inside them including zombies, snakes, spiders and terrifying deadly balls all of which home in on your poor man. If one of these touches the character then a certain amount of energy is taken off his energy counter at the foot of screen. You only have one life to play with, so care has to be taken to avoid contact with the denizens of the dungeons wherever possible and energy restoring objects can be collected to boost flagging spirits.

Exploring the dungeons is rewarding: useful items such as spells with which to confound the attacking nasties, and food, can be collected by running over them. Magic available includes Freeze, Protect and Confuse spells.

Some of the mazes have multi levels which are connected by ladders. Later levels have some very weird Esther-like constructions which look only a few metres high on one side, but drop hundreds of feet on the other, which can lead to an early death for the unwary adventurer. Once all the useful items in the current dungeon have been collected the player must work travel back to the starting location where a points bonus is given and the dungeon title screen displayed again. The quest can then be continued into another of the thirteen regions.

'One thing I didn't like about Realm was the need to load in the different dungeons every time I wanted to play. There's nothing special about any of them, as far as I could see, so why weren't they all put into memory together? The graphics in the game are far too small and indistinct - just one character square, and they flicker awfully, so badly I suspect the movement routines are in BASIC. There's virtually no sound at all, and the gameplay is far too easy to appeal for long. I've enjoyed some of Ariolasoft's games recently, like Panzadrome and THINK!, but Realm of Impossibility is a major let-down.'

'I didn't really rate this game when I saw it a year ago on the Commodore and it has lost the few redeeming qualities it had in the conversion. I found this game totally unplayable and uncompelling. The graphics are so small that the only way you can tell your character from the rest of the mess wobbling around the screen is that it is a different colour - and it's still difficult! The screens are of ten garish and the use of 3D is misleading. The minimalistic instructions left me guessing what l was supposed to be achieving - and the onscreen prompts were sufficiently illegible to be worthless. What are Ariolasoft doing releasing a game like this in 1986?'

'This piece of dated US software is one of the worst Spectrum games I've seen in a long while and it must be an embarrassment to any American programmer. The graphics are appalling with some of the worst attribute problems I've seen since 1982. The characters are tiny little things with no personality or animation - the sort of thing Spectrum users said farewell to yonks ago. Why there is need for a multiload system I just don't know-the game is by no means large and when compared with today's standards it Lust pales into insignificance. The instructions are poor and don't even tell you the keys! The only other thing I can say about this is steer well clear, if it's arcade adventures you're after then look elsewhere.'

Steer well clear of this... if it's arcade adventures you're after, then look elsewhere.