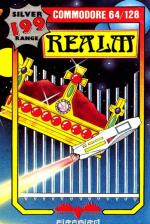 With the sudden demise of the Planetary Orbiting Co-ordinator, our Solar system has become unstable and its component planets are drifting away from the Sun.

To remedy this dangerous situation, a remote droid, codenamed XR3, has been placed under your control. Using this machine, you may enter the Co-ordinatory's inner sanctum, seek out the missing planets and replace them in their correct positions.

The interior of the Co-ordinator is displayed as a full screen scrolling maze, with XR3 situated at the centre. Bonus Crowns are littered throughout the maze and have to be picked up, a task requiring the negotiation of puzzles and traps. Locked doors block the path of progression throughout the maze. These can only be opened by standing the XR3 next to blue arrow markers - but first you have to discover what marker opens which door.

Deeper into the maze puzzle-solving require the use of objects which lie around. Wire, batteries and oil are all necessary for the successful completion of the mission.

If a situation is entered whereby XR3 becomes trapped, you have the option of aborting the mission, which effectively gives you a second attempt at the maze without restarting completely. XR3 is transported back to the beginning of the maze, with all the objects collected so far remaining in his possession.

Using the abort function more than twice results in the destruction of your droid, and the mission is terminated. XR3 also meets an untimely end on contact with the skull and crossbones, which make up part of the maze wall.

Games don't come any more unexciting than this. Travelling around a very large, empty maze, collecting things and opening doors is particularly monotonous, especially when these's no urgency to the task and nothing to liven things up.

Playing became a chore after a couple of sessions, and I was more than glad to turn it off. The graphics and sound are just as forgettable as the gameplay. If they could produce Realm in pill form, insomnia would be a thing of the past...

Ignore the sci-fi type scenario, Realm is quite simply a maze game with puzzles. If you enjoy trekking back and forth over the same screens time and time again, trying to find the correct key for the correct door then all is well and good.

Personally, I find this sort of thing tiresome and, ultimately, boring. Realm is very, very ordinary and offers nothing that would convince me to add it to my shopping list - least of all playability.

Graphics 48%
Colourful, but nothing to write home about.

Lastability 31%
The initial feeling of desperation never really wears off.

This game is very, very ordinary and offers nothing that would convince me to add it to my shopping list - least of all playability.