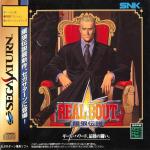 A small, but dedicated, group of game fans keep the SNK torch alight here in Blighty, whereas in Japan the company behind Neo Geo is taken rather more seriously.

SNF are something of a curiosity. While everyone and his processor have stampeded into 3D polygon games and new consoles, they keep churning out derivative beat-'em-ups for a spellbound audience of King Of Fighters, Art Of Fighting, Fatal Fury and Samurai Shodown fans. However, the respect with which they are held goes some way to explaining why Sega licensed them to convert these very games with an expensive ROM cart required, as well as a CD.

Real Bout is an unreconstructed SNK game of the old school. Defenders would argue that a lot of the features that make their way into Capcom beat-'em-ups are developed in SNK's games first. But what about Real Bout?

Real Bout is the second game SNK have produced which uses a cartridge with the CD. Unlike King Of Fighter '95 which used ROM, this is a RAM cartridge that uploads further data from the disc. The initial outlay is high for this package, but you should be able to use the RAM.

The fighting action takes place on three separate planes; background, mid and foreground. A separate button on the pad controls movement between the planes for dodging attacks.

You can attack across planes with diagonal special moves.

Taking the 'ring out' idea from 3D fighters, Real Bout allows you to push your opponent into an instant forfeiting out-of-bounds position. But there's normally something else in the way, so players must propel their quarry through these barriers with a flurry of special attacks.

For some people the Nineties just haven't happened. While Yu Suzuki and his mob have been working away on the virtual experience, the Real Bout team have come up with yet another 2D beat-'em-up.

The feature, and in some ways the problem with SNK beat-'em-ups is they don't have the same cool Nippon stype of Capcom's Street Fighter series, or the guts of the Mortal Kombat games.

They're something in-between, and the features that Real Bout has which will appeal to the ultra-Neo Geo enthusiast will be lost on 90% of gamesplayers.

I've no particular fetish for SNK games, and I don't think the vast majority of gamers do. At their best, they're well crafted beat-'em-ups; at worst, boring piles of crap.

To my mind, this improves on the much overrated King Of Fighters, whilst coming nowhere near the classiness of the recent Capcom games. You don't need Real Bout.

Graphics 82%
High level of detail, but not the highest level of resolution.

Playability 75%
Nothing to write home about, but plenty of moves.

Lastability 70%
About as collectable as locomotive numbers.

Overall 73%
Somebody will buy this whatever we say, so why say anything?

An unreconstructed SNK game of the old school. Defenders would argue that a lot of the features that make their way into Capcom beat-'em-ups are developed in SNK's games first.