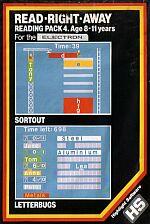 Read Right Away is a series of four packs each containing two programs designed to give children practice in reading. Here I'll be reviewing the packs for older children. Pack 3, aimed at ages 7-10, contains two programs, Magic E and Break-in. The two programs in Pack 4, Sortout and Letterbugs, are aimed at 8-11 year olds.

The teaching is based upon the phonics approach of sounding out individual letters to make a complete word. The first pack I tried had an exercise with magic e's, that trailing vowel that changes the vowel sounds of bit into bite and hat into hate.

The object of the game is to rescue a damsel from the top of a tower by building a ladder of four of these magic e words. The program contains a vocabulary of over a hundred words, divided into fifteen groups. The random selection guaranteed that repetition was not a real problem.

The sexist nature of the presentation appals me and is quite unnecessary. The teaching of reading does not have to portray the inequalities of sexual stereotypes.

Break-in, on the other hand, makes a mockery of the police. If the child succeeds in helping them capture the four burglars, the policemen dance up and down the screen...

The educational principle is sound. The child has to discriminate between the soft and hard g and c sounds. This program, like the others, requires the use of the RETURN and cursor keys.

However, there's been no attempt to protect the BREAK key. Touching it causes the program to be totally lost, not even OLD and RUN will rescue it. This is very poor as the program is designed for use by young children.

The fourth pack in the series follows the same format as the others. The two programs are contained on both sides of a cassette. The box, although of a high professional standard, contains only the minimum of details. There is no information about the number, variety and selection of words within the programs.

However, the screen displays are of the same bold, clear and interesting format. Sound is used throughout to stimulate and help the user of the program.

Sortout is an exercise in putting letters and words into alphabetical sequence. The child has to control a lift using the up and down cursor keys.

There are three types of problems and two levels of difficulty. As with the other games, up to four children can play in competition with each other. However, all players must be at the same level - it's not possible for an older child to play with a younger in fair competition.

I found the Letterbug program most frustrating. Seven words on a particular theme are represented as blocks - one for each letter. The child has to guess at the letters.

I found that when more than one player was using the program attempts to complete words low down on the screen wiped out the words above. This made it nearly impossible to complete the exercise. I had to introduce the rule that each word had to be tried in turn starting at the top. It's obvious that such a restriction was not intended by the designers of the package.

Delving into the program itself, I discovered the extent of its vocabulary.

There are fourteen sets of words with between eight and eleven words in each set. The topics include trees, boys' names, metals, pets, insects, countries and planets. The variety and grouping of words is rather restricted. It would have been an advantage if phonically related words had been grouped together. There is no facility for new sets of words to be added to the program.

Computers have a lot to offer the teachers of reading. They should also play an important role in the home. This program has some serious drawbacks that professionally-produced, teacher-inspired programs should not have.

However, it's better than nothing. If the program creates a situation where parent and child work together in reading, where the child can show off his or her ability and where reading can be fun, then that must be a good thing. Despite my reservations, I'll use these programs with my kids.

Despite my reservations, I'll use these programs with my kids.