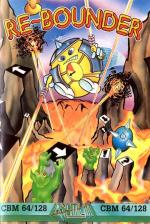 Gremlin's effervescent tennis ball returns to save the world!

Bounder's back! That lovable, felt-covered vulcanised bundle of bounces has returned to provide more high-flying antics on a series of platforms floating high above the world. These aerial pathways are under the control of the evil Overlord, and it's our heroic tennis ball's task to free the suspended pathways once again.

The action is displayed from above, with the continually bouncing bounder bouncing anywhere that the landscape allows. Failure to hit a solid floating platform or piece of machinery on a downward bounce results in Bounder hurtling Earthward, and consequently a loss of one of his five lives.

The mission begins with the landscape scrolling from left to right. Aliens immediately fly into attack, with their touch reducing Bounder's pressure - represented by a fatally shrinking bar. Bounder has an unlimited supply of balls to shoot at the attackers, although the shot's effect depends on the ball's pressure. Every so often a pump station is encountered, and when touched gives the player the opportunity to increase Bouncer's pressure by waggling the joystick furiously. After five seconds the quest continues.

Some platforms are marked with exclamation marks or question marks, giving a mystery bonus when bounced upon. Some squares crumble or disappear - others set off a deadly reaction. Other deadly hazards include lava pools, air vents and walls.

Extra weaponry and armour are discovered along the way in the form of red tokens. These are being picked up and added to Bounder when touched. Extra weapons are vital to success, as the aliens on later levels become increasingly vicious and more difficult to destroy. Sixteen smart bombs are also available for use against the Overlord.

Junctions appear at regular intervals. The scrolling then stops, and a large Guardian appears and attacks with fervour. A hail of fire sees off this menace, and the rotund hero continues his adventure - the available pathways indicated by glowing arrows. The journey may then continue scrolling upwards, downwards or vertically - depending the direction chosen.

There is only one route to the Overlord, and if a wrong turn is taken and a dead end reached the mission ends. Therefore a good map or memory is useful - along with well-developed dextral abilities!

Take all of the playability and addictiveness of Bounder, a bit of shooting, extra firepower and armour, multi-directionally scrolling levels, a whole host of puzzles (not to mention some tricky mapping)... and what have you got? Re-Bounder!

All the flavour of the original is here, but the additional features and vastly improved gameplay have really added spice. So much so, that after playing for ages the game was still managing to throw up surprises. The only annoying thing is having to end the mission because you've reached a dead end - but even that compels you to go back to the beginning and start again.

Look this up even if you disliked the original - Re-Bounder is an excellent game in its own right.

The time of sequels is upon us yet again - but at least this one's better than the original. Re-Bounder takes the first Bounder theme, improves on it... and then improves on it again.

Having the screens scroll in all four directions is a great idea, and really gives the game a new dimension. Re-Bounder has managed to retain the playability of its predecessor - but it's far more flexible, and should hold the attention for longer than Bounder ever did.

Just a few minutes is all it takes for Re-Bounder to become incredibly addictive, and once it's got a grip on you, it's very hard to put the joystick down.

The graphics are incredible, with superb bas-relief effects and smooth parallax scrolling. The sound is the only slight disappointment - the tune seems good at first, but it quickly becomes annoying. The spot effects are weak too - but the brilliant gameplay more than makes up for these minor flaws.

Presentation 82%
Well-presented throughout, including a brilliant title screen. However, the self-indulgent scrolling message is a little unnecessary.

Hookability 89%
Fiendishly addictive from the start, even if death comes all too quickly.

Lastability 87%
The profusion of variety and new features should keep you bouncing and exploring for weeks.

Overall 90%
A brilliant sequel, and a superb game in itself.

A brilliant sequel, and a superb game in itself.