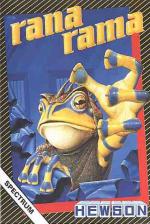 Elsewhere in this issue of C&VG you will have probably have seen Steve Turner's exclusive player's guide to RanaRama. That will give you some idea of the complexities of this game.

To some extent RamaRama is a return to Turner's Dragontorc-style of a couple of years back but with a higher degree of shoot-'em-up to cater for current tastes.

Mervyn, a sorceror's apprentice, has turned himself into a frog, while trying to evade evil warlocks.

To triumph against adversity, Mervyn must take on and destroy 12 wizards who are hidden in each of the game's eight levels. There are between 50 and 100 rooms to each level, packed with a myriad of troops. So you can see there's quite a lot of territory to explore.

There are eight levels of missiles, eight levels of power and eight types of shield for him to acquire and use. The easiest way is to beat wizards to win their runes and then convert them into the items you require.

The missiles, power and shields are all graded and the nasties on the later levels are graded too.

Spell times can also be obtained randomly in certain rooms at spell points.

The rooms are viewed from above and remain in darkness until Mervyn actually enters them. In this way you build up a map of the game as you go along.

When you kill a wizard you can then play a little sub-game in which you have to arrange the mixed-up letters of RanaRama into the correct order. Now this appears a fairly simple task. However I still haven't managed to solve it with any degree of ease. My rare successes must be put down to luck.

As with Dragontorc, RanaRama involves a high degree of strategy. But the problems are not of such a brain-mangling order than the game grinds to a halt.

Good fun. A hit that shouldn't be missed.

Hewson continue to put out good quality games with the emphasis on something new and interesting each time.

I look forward to Steve Turner's next offering. I'm sure it will be every bit as good as RanaRama.

A hit that shouldn't be missed.