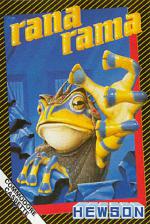 Mervyn is a rather unhappy sorcerer's apprentice - he's accidentally turned himself into a frog! Even worse, the poor amphibious creature has inadvertently conjured his way into a dungeon and become trapped.

Throughout the eight levels of the dungeon there are a maze of rooms and passageways containing twelve evil Warlocks and their guardian creaures. A Warlock carries four runes, from which he draws his power. But should he be defeated in ritual combat, the runes are dropped and Mervyn can collect them. The frog-like hero is then endowed with extra magical power, eventually giving him the ability to become human again and escape from the dungeon.

The mission begins on Level One of the dungeon, with Mervyn exploring the environment for Warlocks. An aerial view of the room Mervyn occupies is displayed; leaping through one of the exits reveals another room, and as Mervyn moves around the entire dungeon becomes exposed. Some locations have hidden doors which are only revealed if Mervyn pushes against them or activates a Glyph of Seeing.

The Warlocks' evil creatures are found in most locations, attacking as soon as the amphibious one enters. Mervyn can fight back by throwing bolts of magic, but it takes several hits to destroy some of the more powerful opponents. In some locations there are generators which produce deadly magical weapons if they aren't shot and destroyed.

Ritual combat is declared when Mervyn runs into a Warlock. The fight begins with a screen showing the word "Ranarama". The letters are scrambled, and Mervyn has to unscramble them again before the time limit elapses. Failing to achieve this within the time limit results in the total loss of Mervyn's life energy. Success results in the death of the Warlock and his runes are scattered, allowing Mervyn to retrieve them. The runes only remain active for a few seconds though - and if they aren't collected quickly enough, they disappear and are lost forever.

Occasionally, a room contains a Glyph carved into the floor. Glyphs are activated by stepping on them and endow the frog with extra abilities - Seeing, Power, Travel and Sorcery. Activating the Glyph of Seeing reveals a map of the explored dungeon (including hidden doors). The Power Glyph destroys everything on screen, and the Glyph of Travel is used to journey from one level to another.

The Glyph of Sorcery is the most important, being the key to ultimate success. Activating this Glyph displays all reclaimed runes, and Mervyn's four vital factors: Power, Offence, Defence and Effect. At the start of the quest Mervyn has Level One ability in each factor (apart from Power, in which he has Level Two - 'Psychic'). Pushing the joystick up and down flicks through the spells which can be exchanged for runes, and a spell is cast by pressing the fire button.

Mervyn dies if he fails to increase his Power Spell and loses all of his life energy. However, he starts the mission with a Level Two power spell, and this can be cast to give Mervyn another life. The unfortunate frog now starts his new life with a Level One spell - 'Mortal', and if all energy is lost before the spell is increased the mission ends. Mervyn no longer has the ability to create another life.

Progressing through the deeper dungeons, Mervyn has to gain Higher Energy spells in order to survive. For example, travelling down to the fourth floor with only a Level One Offence spell would be folly indeed!

When all the Warlocs on a level have been destroyed the environment goes dark, informing the player that another level should be explored. Destroying the Warlocks on Level Eight and collecting their runes enables Mervyn to shed his froggy exterior, and once again return to the human world - a Free Man.

Ranarama is graphically and sonically weak, but it's beautifully designed, rewarding and incredibly playable. What's so appealing is the superbly balanced difficulty level.

The first few levels are pretty easy, and then things start to get extremely tough, usually resulting in the demise of Mervyn. However, if you do one thing instead of another you can advance a little further - so you have another go, get a bit further and then realise... And so on, I found myself constantly going back just to find out whether a lower level could be reached.

Ranarama is an unusual, though not entirely original concept - it borrows heavily from Paradroid, Gauntlet and in some ways Wizard's Lair. It's a bit garish in its use of colour at times, though some of the sprites look decidedly creepy and work quite well.

The playing area is huge, but there is little to do in many rooms apart from shooting the occupants - whch soon proves tedious. Sadly, Ranarama is too derivative to be ultimately worthwhile.

Ranarama constantly surprised me. Don't be fooled by the Gauntlet-esque overtones, there's so much more involved. The way the rooms are revealed is an innovative touch, as they only become visible when entered.

However, exploration is only half of your worries: the intermission screen that appears when a Warlock is encountered requires fast, logical thought. The animated graphics are superbly detailed, although the characters are transparent and have a tendency to get lost in the floor patterns.

The gameplay has just the right amount of blasting, mapping and thought involved to make it really enjoyable. Well worth the asking price.

Graphics 59%
Unusual and initially confusing, but they portray the action adequately.

Hookability 91%
Looks confusing, but the action is deceptively simple and captivating.

Lastability 85%
Eight levels to get through - and the last four are extremely tough. However, the action is a mite monotonous and not suited to repeated or lengthy play.

Value For Money 85%
Generously priced for a program which gives instant playability and sufficient lasting appeal.