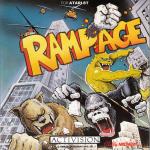 Rampage combines some of the best elements of over-the-top American 'B' movies and a simple but addictive games design to excellent effect.

The storyline is a scream. Three 'ordinary' American teenagers head down to their local burger joint for a blow out - *but*, little do they know that those cranks in the food development lab have slipped sonme dangerous experimental additives into the Big Mucks (Look, don't go on at me, I didn't write it!). The result: three ordinary American kids turn into three ordinary American monsters - bent on reducing every city in the dear old US of A into so much rubble.

The best thing about the game is that the designers didn't bottle out on the plot. No, you don't play the police force or the army - you play the part of the monster and your aim is to demolish as many buildings, helicopters, and police cars as you can whilst snacking on the inhabitants of New York, Chicago and many other cities.

Three players can join in the demolition - working collectively or playing aganist each other. You can let the computer control two of the monsters and take them on.

Points are earned for destroying buildings. You can make buildings tumble to the ground with that characteristic puff of snoke at ground level by punching their windows out and bashing gaping holes in the walls. When there are enough holes, the buildings will fall.

One of the first licensed coin-op conversions for the ST - Rampage whets my excitement for '88.

One of the first licensed coin-op conversions for the ST - Rampage whets my excitement for '88.