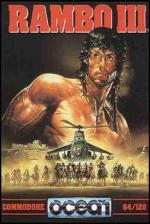 Does anyone out there remember the end of the film "Rambo"? You know, the bit where he goes on about wishing that his country would love him an' all that an' everyfin'. Well, it appears that his country does think something of him, as he's been asked to go on another mission where 'only the best will do'.

This time it's Afghanistan, where Colonel Trautman has been captured by the naughty un-American, pinko, commie Ruskies, and only John "Don't push me!" Rambo can save him.

You take the role of the hard-man himself as he enters the fort in Afghanistan. You must search for Colonel Trautman and make good your escape.

You start off armed with only knives - but other weapons, including explosive arrows, a pistol and a machine gun, can be found around the fort to help you. There are a couple of disadvantages though, as the ammunition is limited and the noisier weapons attract enemy attention. Also to be found are objects such as mine detectors, infra-red goggles and medi-kits which may be of some use.

Once you have rescued the Colonel, you let him loose to rejoin the Afghan horsemen, while you escape North. On your route you will find critically placed bombs which must be primted in order to destroy the fort. Once they have all been set, you must find a helicopter and make your escape.

Unfortunately, the helicopter is unable to take you across the border, so you must fight the rest of the way in a stolen Russian task, blasting enemy troops aside as you go. Only one rule here: kill or be killed.

And that's it. Phew!

Although on first sight there appears to quite a lot of content in the game, Rambo III proves to be a rather tedious experience. The graphics aren't up to much - a few sprites and bland, repetitive scenery.

The music can't hold a candle to Ocean's previous Rambo licence (still some of the best music on the C64) and the effects are extremely weedy.

The later sections, with their total style change, are a little more interesting due to the basic blasting action, but having struggled through the boring earlier stages I expected a lot more.

I quite enjoyed the first Rambo game, but I can't say I feel the same about the follow-up.

I thought the review of the original Rambo was a little harsh, as it was quite playable - and the music was incredible - but I found it very difficult to be enthusiastic about Rambo III.

The graphics are of a similar standard to the previous licence, but the sound is nowhere near as good, despite the programmer trying to emulate the feel of Martin Galway's masterpiece.

Playability-wise, the game is somewhat weak; the first level is very large and the graphics are pretty samey throughout - dullsville.

After battling through to the later levels, I thought 'well, yeah... but was it worth it?'

In my opinion it wasn't really enough, but if you are a great Rambo fan, I suppose the blasting will remind you of the films and appeal to you. Unfortunately it just left me cold.

Graphics 56%
Hardly any different sprites and little diversity in the backgrounds make the first levels dull. They do improve slight though.

Hookability 48%
The first level is very boring and will put many off.

Lastability 50%
Mappers and Rambo fans will probably stick it out.