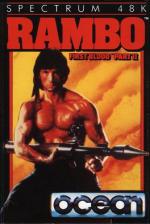 If only life was like the movies - then no man, no law, no war would've stopped me! As it is, I had a terrible time just staying alive let alone securing the release of every Yank north of Saigon.

The game begins just after our muscle-bound megastar has been dropped into the jungle, at the start of his mission - reconnaissance only, you understand, with orders not to engage the enemy. You are armed with an endless supply of grenades and knives but if you do encounter the enemy in the first section it's advisable to rely only on the latter. The noise of the grenades is sure to bring the massed ranks of the Red Army into the battle.

You'll find all the weapons you need randomly scattered around the first part of the game - and there are extra points for collecting them. The only other way to amass points is to kill everything that moves - and a few things that don't! Only when you've crossed the banks of the river into the enemy's camp does the action start to hot up. There you have to locate the hostage and release him before heading north again to free the rest of his compatriots.

Rambo is best described as a thinking man's Commando. That game starts fast and gets faster until you end up like a one-man whirlwind. Rambo develops into a solid shoot 'em up but it just doesn't seem to be such a drain on the old adrenalin. Somehow it lacks the excitement of Elite's number one hit - perhaps it's the larger playing area, maybe it's the slower start or could it just be the amount of strategy involved? After all, who ever heard of Rambo having to think?