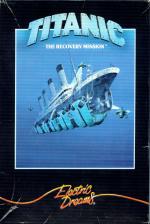 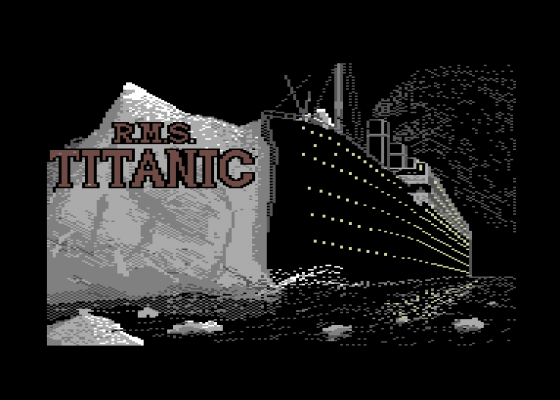 For over eighty years the wreck of the Titanic has rested in the bottom of the North Atlantic. She was an immense vessel on an ill-fated maiden voyage when she was struck by an iceberg and sunk, killing most of the passengers and crew who were on her at the time. She was carrying enough gold and jewelry to make whoever would mount a salvage operation phenomenally rich, but until now, the technology and money to mount such an operation have not been available. You are the captain of the first vessel to undertake an attempt at raising the Titanic and reaping the rewards.

Each day, you may make one visit to the wreck in the TSI, the world's most advanced undersea exploration device. The TSI is equipped with a camera (capable of taking six photos per visit), a robot arm which can pick up objects (up to four of which may be carried), oxygen to last for several hours, and communication facilities which allow two-way contact with the ship for resurfacing or sending details of objects to the laboratories for examination (or even to the accountant so they may be sold). Selling objects and getting good press reports are both essential to help along the finance.

Whilst on board the mothership, the screen displays a calendar (with the current day marked) and five icons. The first of these is the dive icon which may only be used once per day. Second is the finance icon, used to confer with the sponsors, the accountant, and to check the costs and funds available. Next is the press icon where conferences may be held throughout the game. An icon depicting a crescent moon is used to move time forwards by one day and to give your crew a full night's rest. A new date will then be displayed on the calendar. Lastly, there is a disk icon allowing up to twenty six games to be saved on either disk or cassette. 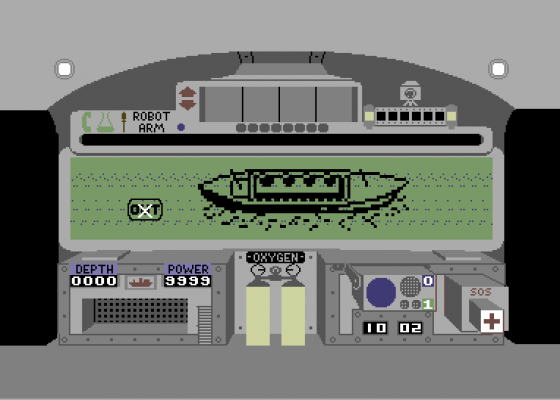 When in the press room, a series of monitor screens display the faces of reporters from various international publications. One by one, journalists ask a wide variety of questions (and occasionally make accusations) about your mission. By using the joystick, you select answers to their questions from several possible replies. If there are any photos from the last dive, these may be shown to the press. They may ask to put reporters on board the ship or for an exclusive interview. You are free to deal with such requests as you see fit, but it's important to keep the press reasonably happy.

In the finance room, moving the joystick allows you to select a desk, a telephone or a safe. Selecting the desk reveals how much any necessary repairs cost and how long they take to complete. Continual pressing of the fire button provides information pertaining to how much money is due at the end of the week (from each sponsor). Selecting the safe displays the current bank balance. The way the bank operates means no action is taken on overdrafts until the end of the week, so if enough money is coming in, you may go overdrawn during the week. If the telephone is selected, one of a series of photos is highlighted. Each photo shows the face of one of the sponsors. The joystick is positioned on the photo of the required sponsor and following a press of the fire button, you are either told that the sponsor is unavailable or his face appears on a monitor and he tells you whether or not he will give you any money and if he does, how much.

Selecting the dive option lakes you to the main part of the game. A screen showing a view of the wreck is displayed along with a cursor. The cursor may be positioned over one of five entry points into the vessel. When the desired entry point has been confirmed, the TSI sinks to that location. One of the most original features of the game is the camera through which you can see your surroundings. A picture similar to that of light intensifier cameras is generated, pixels swirling everywhere. Rooms may then be explored in a fashion similar to that of Mercenary. If a doorway is darker than the surroundings, it may he entered by centering it on the screen and pressing fire. If it is shown in outline only, entering it should still be possible with precise positioning, but during the course of the review, no-one managed to do this. It the door has a lock on it, then some other means of entry must be found. Another way of moving is possible by watching the colour of up and down arrows on your display. If either light up green, it is possible to go to another deck in that direction by pressing the plus or minus key. 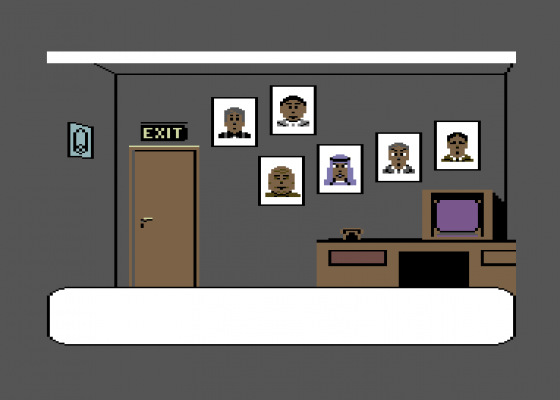 The TSI is fitted with a robot arm. This may be used to pick up certain objects, which are then displayed in the hold. However, objects may be fitted to walls or may just be too heavy to carry. The arm is damaged if an attempt is made to pick up certain objects and remains unusable until the TSI returns for repairs. The arm is useful for more than picking up objects for the hold. Once some objects are being carried, up to two of them may be selected and brought back out on the arm. If the TSI is in the room at which it last entered the wreck, pressing L sends the objects back to the lab for examination. Pressing the £ key sends them to the accountant (who sells them and reports to you in the finance room). Finally, any object in the grip of the arm may be photographed. A camera is displayed at the top right of the screen along with part of a roll of film. A photo is taken by pressing the F key upon which the camera flashes and one of the spaces on the roll turns from black to red. Once all six spaces have turned to red, the film has been used up for that dive.

Other features of the control panel include a sonar screen to keep track relative to buoys launched at your discretion. They are useful for navigation through the rooms but not essential. Then there is a scanner with which you can check the rough nature of the next room. Again, useful but not necessary. Depth and power levels are constantly displayed to the left of two large, yellow oxygen tanks. These turn slowly to red as the air supply diminishes.

There is no time limit to the game so long as the money keeps coming in. The eventual aim is to find where eight flotation bags have been situated and to activate them, raising the ship by doing so. The automatic vessel that positioned the bags was faulty and their positions are not known. According to the instructions, most of the rooms are in their approximate positions in the real vessel and almost all the objects were on the ship's manifest. There are a lot of puzzles to solve and people to please before success is likely. Raise the Titanic tries to be authentic in approach and a note in the instructions points out that whilst this game may seem in bad taste to some, it is dedicated to the bravery of those who died in the tragedy. 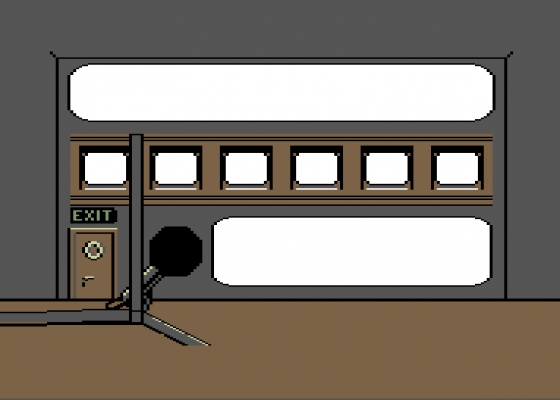 Thinking about it, you could almost sum up Raise the Titanic as a sort of Hacker for fish freaks. However, it would be easy to dismiss this game as nothing remarkable in terms of animated adventuring. This would be a gross error of judgement. The game is well devised, has some very pleasing aesthetics (the enhanced imaging effects are superb) and enough playability and complexity to keep the hardiest gamers going for some time. The author obviously has a sense of humour, as the witty press conferences prove admirably. At one point, a member of the Titanic Historical Society asks you if the spirit of the occasion moves you. The game is a multi-faceted arrangement of good graphics, clever and original plot and gameplay, put together with what appears to be highly competent programming. I have no reservations about recommending you to rush out to buy this game, it's great.

I didn't like the look of this game at first - to be honest, I didn't like the look of the length of the instructions. But I decided to persevere and I'm glad that I did because Raise the Titanic turned out to be an enjoyable game to play. The graphics aren't much, although the underwater sequence is very neat indeed, and the music does tend to irritate, but it is an unusual, and a somewhat innovative, approach to a game and one that works quite admirably. I would say that there is plenty of depth to Raise the Titanic, if you'll excuse the pun, and that there is certainty enough game to keep you happy for a fair while.

Presentation 80%
The icon driven system is very easy to use.

Graphics 84%
Although most of the graphics are of reasonable standard, credit must be given for the effective, original and clever image enhancement effects which also add to the atmosphere of the game.

Hookability 67%
This area suffers more than most because of the unusual and subtle nature of play.

Lastability 89%
No way this game will be solved overnight.

Value For Money 86%
If the idea appeals, the game won't let you down.

Overall 88%
Very clever and original, but it might not be everyone's cup of tea.

Very clever and original, but it might not be everyone's cup of tea and there's no way this game will be solved overnight. 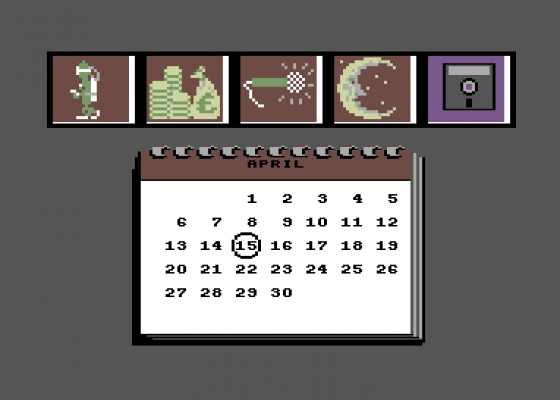