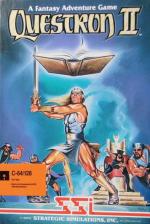 The cover of Questron II's box amply prepares the prospective purchaser for the contents and substance of the game, if he has any experience at all, with SSI's fantasy role-playing epics. An impossibly brawny hero waves a sword at a book floating mystically above eye-level, while various black-cloaked individuals rage impotently in the background. This is, as the player may also deduce from the title itself, a sequel.

"Now I wonder what you did in Questron I?", I asked myself as I zipped open the cellophane wrapper with my battle-sharpened molars. "Saved the Land of Ox from hordes of ravaging monsters and one particularly nasty sorcerer with delusions of grandeur?"

I opened the rulebook and read "Though you have completed your quest to save the land of Questron from the crazed magician Mantor and his Evil Book of Magic..."

Yes, it's another half-baked fantasy scenario providing an excuse to wander around a few mappable dungeons and wildernesses hitting monsters over the head and hoarding treasures. My increasing sarcasm about these plots is perhaps unfair - I don't know if I'd be able to come up with something more original myself in the mushy fantasy line - but I can't help feeling that SSI must employ some talented and imaginative people, and that this sameness is more the result of laziness than lack of inspiration. Fantasy role-playing scenarios of this type are also characterised by a complete lack of humour, while they cry out for self-parody; in contrast to Infocom adventures, for instance, which treat the whole dungeon-prowling environment with a refreshing pinch of salt.

The player, as usual, takes on the part of Resident Suicidal Adventurer (Full-Time). He has just saved the land of Questron from the yoke of tyranny, but Mesron the Great Wizard is not satisfied. Mantor's instrument of power - the imaginatively-titled Evil Book of Magic - is still in existence, and it is apparently flame-proof; the only way to destroy it is to go back in time and make sure that it is never created in the first place. To this end, the adventurer is sent back in time and space to a place called Landor, a realm ruled by Wise King Keflar but plagued by the usual prowling monsters and in danger of insurrection by Mantor, and his council of Six Mad Sorcerers. All advantages that he may have gained in solving the original Questron are wiped out, because the character has never existed on Landon; this may be infuriating for fans of the first game, but at least it means that players of the sequel are at no possible disadvantage.

The packaging is of SSI's usual high quality. There is a booklet printed on what I think is supposed to be parchment-look paper, which contains the storyline and a catalogue of the monsters to be found wandering about the land. A short description of each adds a bit of colour and depth to what is just a collection of hit-points when it's encountered in the game itself. A small card leaflet disposes of what rules there are what admirable brevity.

This is not a complex game at all, in terms of rules. It inclines very much to the minimalist school of computer role-playing. The player doesn't even have to roll up a character: though the character does have the usual list of attributes like charisma and intelligence, they are automatically set at a standard level and there is no opportunity to adjust them. The attributes do affect things like the probability of hitting in combat and the damage done, but it's easy to forget they exist in play. More important and visible are the three simple status values of hit points, food and gold, which are displayed permanently on the screen. Every character starts off with a straight two hundred in each. Hit points perform the usual function, food is consumed as the character travels and must not be allowed to run out, and gold, which is found on monsters and in treasure chests, can be used to buy weapons, armour, more food, more hit points and information. Landor is a very materialist society; even its priests badger for contributions.

The player has to prepare a character disk first, which acts essentially as a save game disk and doesn't take any time at all to format. Individuality is bestowed upon characters only be their name. After the bare minimum of preliminaries the player's character is launched into the game and landed - as usual - on the wilderness map a couple of squares away from a convenient town.

There is a boating option on the command menu and a section on sea monsters in the source book, so I gather that there is more than one landmass to be explored. The first 'island' is fairly, though not impossibly, large and contains plains, forests, swamps and mountain terrain. Liberally dotted about the landscape are towns, and there are also a few cathedrals and Castle Redstone, the abode, by inter-dimensional video link, of your mentor Mesron.

Moving about the wilderness is an easy matter of guiding the figure on the screen with the joysticks. The time passes of its own accord, but not impossibly fast. There seems to be no seriously noticeable terrain effect, though as might be expected the adventurer's journey is frequently interrupted by random encounters with beasts appropriate to the environment; different nasties appear on the mountains and on the plains.

Other actions are carried out by selecting the appropriate command on the permanently-displayed menu. The player can choose to fight, speak, use an item, wear an item or board a ship. He can examine the attributes and possessions of his character at any time, and save the game unless he's down a dungeon (and therefore in real danger). Manipulating this menu is straightforward enough, though with the joystick it's slightly clumsy and can lead to mis-selection in the heat of combat.

The towns are laid out very much in the style of Ultima IV with a variety of shops and characters wandering about. Not all towns have all facilities, but it's hardly a long trek between centres of civilisation and most are well-equipped. The player can buy and sell armour and arms, stock up on food and hit points, buy pub rumours for the price of a pint or gamble away some gold on an interesting selection of games. There's a nicely presented version of Blackjack and something called Wizard's Ball which looks like an offcut from some entirely different game. Gambling is not a very efficient way to make money in the realm of Landor - much better to take a trip out into the country and back a Snooper Slink into submission - but it provides an amusing diversion for the player. Magic spells are also on sale in the towns. The character can talk to any of the wandering inhabitants, but their conversation is very dull and repetitive. The official rumours are not much better, and only occasionally amount to more than trite pieces of advice. At the outset, the variety of weapons and armour offered is not impressive. It seems that time has to pass, and the character has to improve, before the shopkeepers of Landor get more expensive items in.

More exciting than the towns in adventuring terms are the cathedrals, one of which houses the opening into the first available tomb and offers the player a chance at some serious underground adventuring. Tombs are mazes viewed in the same overhead way as the wilderness, inhabited by more vicious monsters and containing treasure chests and characters likely to send you off on the next bit of your quest. The first place to find is, however, Castle Redstone. The character is already in possession of a golden key which opens a door in the castle and lets him into the Hall of Visions, where Mesron offers periodic advice from the safe distance of several centuries into the future. On his first visit, the adventurer is told to go off and find a magic wand. I assume that the required wand is hidden somewhere in the tomb, but despite several forays I haven't managed to stay alive down there long enough to find it. I have found another robed gentleman who wishes to be presented with another magic item before he will help me further so that must be the next goal. Perhaps once I've found the wand Mesron will tell me how to get hold of a boat and sail further afield...

Despite the unoriginality of the concept and the implementation, Questron II is a great deal of fun to play and this 'interlocking quest' kind of storyline is enough to sustain interest. There does seem to be a definitive narrative game structure, with the enticing promise of something different if you persist. There is, for instance, a whole aspect of the game that I cannot comment upon because I didn't get that far; the real dungeons, as opposed to the tombs, are displayed in animated 3D perspective. How well this works I can't say, because I suspect that the first dungeon lies overseas and despite several hours of play I hadn't even succeeded in finding the first magic artifact. I would have been happy to carry on if I hadn't had to tear myself away to write the review itself.

The complexity of the storyline amply makes up for the simplicity of the play. Many players will, indeed, consider the lack of statistics and complex combat to be an advantage. Questron II is worth looking at.

Graphics 72%
Respectable, given the type of game it is - the graphics of the player character and monsters on the overhead view are rather small and indistinct.

Rules 66%
Judged by the usual standards of the company, not very full.

Playability 87%
The simple play keeps the action smooth and fast, and the interlocking storyline is compelling.

Overall 81%
An entertaining example of its type, though not the best available.

An entertaining example of its type, though not the best available.