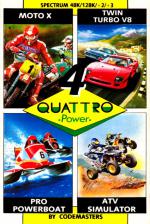 Fear not. The Codies haven't finally got around to doing an Audi Simulator or even an Extinct Fizzy Drink Simulator. The Quattro in the title refers to the fact that there are four old Codies titles crammed onto this tape, making it a bit of a bargain barg. And the games are... Moto Cross Simulator (a fairly dire 'little motorbike going over lots of logs and things' game), Twin Turbo V8 (an appalling OutRun clone - hardly the Codies' at their best), ATV Simulator (a genuinely 'amazingly crucially addictive - it's wicked!!!' buggy simulator which I'll have to admit to playing for hours when it first came out) and Pro Powerboat Simulator (a generally competent, erm, powerboat simulator).

So that's two normal Codies games, one good game and an absolute corker (near enough), all crammed onto one tape for three quid. Not bad, really. I reckon it would be worth it just for ATV Sim to tell the truth. It really is a neat little game, and with two players the feeling of competition becomes almost homicidal. So that's a cautious pat on the back for the Codies then, and a firm recommendation for everyone else.

It really is a neat little game, and with two players the feeling of competition becomes almost homicidal.
Logout