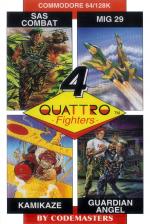 Those budget compilations from the Codies are blimmin' good, aren't they? Four games for the price of one, loosely connected by a common (and often tenuous) theme. This time it's all-out action with Quattro Fighters, so polish those knuckledusters, load that machine gun, and get stuck in!

The pack gets off to a very poor start with Guardian Angel. A bog-standard horizontally scrolling beat-'em-up, it features terrible monochrome graphics, detail-destroying backgrounds, and a main sprite that looks like a flasher! There is nothing to distinguish Guardian Angel from the scores of other beat-'em-ups on the market, and most are far more playable and interesting. Next please.

Ah, now this is more like it! Scoring 72% in Issue 67, Kamikaze is much more colourful, much more playable, and a far superior game. Featuring horizontally scrolling, eight-directional shoot-'em-up action, it actually looks like a C64 game, not just a Speccy program with knobs on. On the minus side, the fire button is a little sluggish, and the enemy bullets travel a bit too fast, making the game a wee bit hard. Even so, it should have you coming back for more.

A blatant rip-off of the classic After Burner style, MiG-29 Soviet Fighter is a little too fast for its own good. A view-from-behind shoot-'em-up, you must blast your way through several levels of marauding baddies, avoiding enemy fire and ground flak. Take too many hits and it's time to bail out! When you get the hang of the excessively fast running speed, MiG 29 is a very entertaining game, certainly much better than Activision's official After Burner conversion.

Why do Code Masters have to put the word 'simulator' in almost every title? I suppose SAS Combat Simulator might shift more copies than Averageish 8-way Scrolling-Commando-Style Combat, but you'd think they could find a more original way of putting it.

It's not a bad game, just not great - a standard, run-of-the-mill blaster with nothing new to offer.

Ignoring the dreadful Guardian Angel, what we have here are two above-average shoot-'em-ups, competent, but not spectacular, and a third that is very average but still fairly playable.

Quattro Fighters is certainly worth a look if you don't have any of the games already, but think about it very carefully if you have.

Certainly worth a look if you don't have any of the games already.