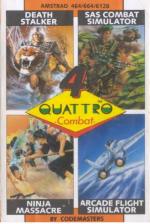 It's dark. You Walk cautiously through the underground tunnels, sword at the ready. Suddenly an ore appears - automatically the sword flashes in an arc, cleaving the hideous creature's skull in two. Then there's a brief haze as the body magically decomposes into nothingness...

...Seen from the cockpit, two bandits come in fast at six o'clock. The lead spits from the barrel of the machine gun. and one of the enemy bursts into a crimson ball of fire. The other manoeuvers itself onto your tail. You try every trick it the book, but you just can't shake it off. You're hit, your vision goes red...

...Now the enemy surrounds you, pinning you down with and lobbing grenades. You're only chance is to keep moving through the hostile jungle terrain... if you can just reach the jeep...

...But a thousand oriental warriors are coming at you from all sides. The death stars leave your hands at a frightening pace, mowing them down like flies. There's a stairwell somewhere around, taking you to another equally tortuous level of the temple. But where is it...?

...Just a minute, what's going on? The scenario's a bit mixed up, isn't it? Well, yes. That's because it's not one game, but four. Quattro Combat is a compilation of four previously released Codemasters games. They're linked together through one theme: violence. All of the games pit you against overwhelming odds, which you have to overcome by inflicting all manner of death and destruction.

At under 75 pence a game, it's difficult to see how anybody could be disappointed with this compilation. Although tied loosely together with the combat theme, the games are generically different enough to make them all worth playing in their own right. All are good too, being the cream of the crop from the Codies' back catalogue.

Combat will have something for everybody. Whether you're into fantasy, planes, ninjas or straightforward warfare, there's something here to suit. Sure, the games may not be state-of-the-art, but for three quid, you get four very decent games at a very decent price.

Arcade Flight Simulator sees you in the cockpit of various warplanes spanning the three world wars (We're yet to have number three). In WWI you're flying early biplanes. WWII puts you in control of that ace of aces, the Spitfire. Things are up to date in WWIII. Here you're in a modern jet fighter, complete with missiles.

There are three missions to complete, each in a plane of a different era. The first has you taking off from an airstrip from the green fields of England. You have to destroy shooting ten enemy planes out of the sky before returning to your airbase and picking up a bomb, and dropping it on top of the enemy camp.

Level Two has you taking off from an aircraft carrier. You have to do exactly the same thing as in the first level, though - pot ten planes, collect bomb, and blow the base.

Level Three's jet fighter scenario is set in the desert (topical, eh?). Apart from that it's exactly the same plot with different sprites. It does get tougher as you progress; there are more enemies on screen at a time.

Fuel runs out quickly whatever you're flying, so you need to visit the fuel dumps that are scattered around. Flying low over them tops up your tanks. Bullets need replenishing too. For this you need to head back to base and land.

It's not easy to shoot down the planes. Not only do your bullets have a very short range, but the planes can fly at different heights, represented by the size and detail of the sprites. You have to be at their level to shoot them down, and, of course, they shoot back too!

Because of the nature of the game, the sprites are very small. At low heights they're little more than a tiny cluster of pixels. They do get more recognisable as they gain altitude, though. It can sometimes be hard to see exactly what's going on against the background. Bullets are particularly difficult to spot, so a careful lookout is necessary.

Sound is good. The fx change with each type of plane. The early gunfire from the biplanes in the first level change to the rasp of machine guns in Level Two. This changes again to the swoosh of missiles when at the controls of the jets.

There is a two-player game which is very different from the single-player mode. There's no mission to complete and the screen doesn't scroll. The two planes re-enter the wraparound screen on the opposite side when they fly off one edge.

It's a player on player dogfight, and like most two-player games of this type, is extremely simple, but provides endless hours of entertainment.

Arcade Flight Simulator is hardly that, but it's an excellent airborne blast nonetheless.

Death Stalker whisks you away to an ancient world filled with magic and monsters. Your warrior is (at first) equipped with a sword with which he can chop the ores and undead skeletons to pieces.

The quest is to go down deep into the bowels of the earth and rescue several prisoners held captive, probably by some dark, evil figure. Rescue is attempted by the use of potions. You'll need one to free each prisoner, and you'll find them scattered around the mystical landscape. There are plenty of other objects to be found, too. Keys are important as they open up parts of the game hitherto unreachable. Food keeps you going - if it's not poisoned.

The graphics are wonderfully atmospheric. Up above ground, tall trees and towers make up the background. Enter the earth, and rocky caverns and rough-hewn passages are drawn brilliantly. Torches burn brightly on the wall, complete with flickery flames. Other things that flicker occasionally are the sprites... This is slightly annoying, but bearable.

The tune that accompanies the game adds even more to the atmosphere. It's very catchy and goes very well with the game indeed.

Death Stalker originally scored 72% back in AA41, it is the only game of the foursome that has been reviewed in AA before. The rating is probably a tad low for such a polished budget game, which explains why it's being given a whopping 81% this time round. Ah, nostalgia...

It's a jungle out there. In SAS Combat, your soldier is taking on all comers, with a smoking gun to greet them. The game is somewhat reminiscent of Ikari Warriors. Your trooper has to make his way through a scrolling landscape, gunning down bad guys and lobbing grenades. There are one or two bonuses scattered around the battlefield. Picking these up gives you power-ups, the most useful of which is a jeep. In this, you're invulnerable against bullets, and only a grenade can kill you.

At first the game area scrolls from right to left, but at a certain point it switches to vertically scrolling.

As well as soldiers to slaughter, there are gun towers to contend with. On the upwards-scrolling section a train makes the odd appearance. This can be destroyed for extra points.

On reaching the end of the level, play switches to a gunless combat section. Here the viewpoint switches to side-on. and you have to get from left to right. This time the enemy cannot be avoided, and pinpoint accuracy is needed to knife them in the guts [Ugh! - Ed]. This part of the game contrasts heavily with the earlier section, which was too easy. This is frustratingly difficult. Stab your victim a second too early or a fraction to late, and you're dead.

The graphics are blocky, bold and bright throughout. SAS Combat is perhaps the weakest of the lot, but that's not to say it's a bad game. If falls just slightly short of the mark compared to the others in the collection.

Ninja Massacre is billed as a sort of oriental combat game. It's not a tiresome beat-'em-up however, being more like Gauntlet than anything. One or two ninjas can join in the onslaught.

The game is huge. There are fifty levels, each several times the size of the on-screen area. There's plenty of variety, too. Some screens contain puzzles, some are mazes, and some consist of nothing more than mad, murderous mayhem!

The sprites are tiny, but there can be literally hundreds of them on-screen at once. The little chaps can move very quickly indeed at times. As they reach the edge of the screen, it scrolls, revealing more of the playing area. The maps are made from walls, doors and a variety of other features. On each level you have to find a stairway down to the next level. Sometimes it's quite straightforward to find this exit, but it can be more profitable to explore more of the level in the hunt for food (to top up your rapidly-decreasing life counter) before using it.

As well as grub, there are many other collectables scattered around the levels. Treasure chests give you extra points. Keys allow you to unlock doors. Scrolls allow you to use a magic spell that obliterates all monsters and generators on-screen when used. Other icons affect the way your bullets work, make the monster run away, or give you invulnerability for a short while.

With a single player, it's quite a challenge - but the fun really starts with two players. Here you can work either as a team, or against each other. You need to co-operate in some instances - the screen will only scroll so far, as it has to accommodate both players.

Startling value-for-money. With the possible exception of SAS Combat, all of these games are well worth £2.99 on their own, but in this compilation they'll set you back just 75p each!

Overall 83%
Four for the price of one! That's value for you!

All good games, being the cream of the crop from the Codies' back catalogue. All pit you against overwhelming odds, which you have to overcome by inflicting all manner of death and destruction.
Logout