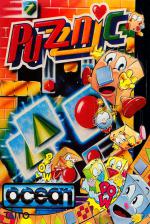 Puzznic is a puzzle game. In fact, its just about puzzle-gamey as they come. Basically, your job is to make like-coloured blocks disappear by getting them to touch each other, so, yes, if that sounds to you exactly like Plotting then you'd be right. True, its not quite as pretty to look at (smaller blocks and not as much colour) but I reckon there might just be a more involving game lurking in here somewhere. Let's take a look, shall we?

But first, a little aside of my own. Don't you think it's weird how Ocean should suddenly release a couple of very similar puzzlers after years of having bags of success with action-type games and totally ignoring anything the slightest bit cerebral? Both Puzznic and Plotting are Taito arcade conversions, which maybe gives them a bit more appeal (puzzle games are well known for getting loads of accolades in the magazines and then selling about three and a half copies), but it'll still be interesting to see if the Ocean marketing machine can make much of them. (It deserves to, because, as we've come to expect, they're both rather good.)

But onto the matter in hand, Puzznic - what is it, and how does it work? Well, take a look at the screenshots (always a good place to start, I feel). As you can see, each level is a sort of single-screen-shape thing, filled with little blocks of various designs. You control a cursor which you use to lock onto any brick you choose and then shove it to the left or the right. That's it though - you can't do anything else - so if your block falls off a ledge and down some hole (there's gravity operating on these screens, see) you can't do anything to get it back. (Well, not without manouvring it onto one of the occasional lift things that appear in later levels anyway.)

Oops! I've not said what it is you've got to try and do yet, have I? Well, as is so often the case with these games, the plan is to clear the screen by getting the like things together so that they cancel each other out and disappear. Each screen has a time limit, and each game a number of retry options (so if you've managed to cock things up so badly there's no possible way block A can be made to touch another block A you can just abandon the screen and try again). Cleverly, any time you pick options (like switching from little icons designating the blocks to a numerical system), or pause the game for any reason, it sticks a massive sign over the play area, so you can't work out how to complete the screen while the clock's not running.

Right from the start this game oozes a certain sort of elegance. You can tell it's one of those really-well-thought-out little Japanese numbers - the learning curve is exactly right, giving you easy screens to start with and gently introducing you to new elements of the game, letting the really tricky stuff sneak up on you almost unawares. Complications like using the moving platforms (so you can sometimes get a brick to travel upscreen after all), having to complete two different but unconnected areas on the same screen, and - the real killer - having an odd number of the same design blocks to get rid of (meaning you've got to get at least three to touch at exactly the same time!) are all introduced neatly into the gameplay. This is a class act all right.

Faults? Well, the small monochrome blocks (apparently they tried colour in an early version but there was loads of clash when they fell) and the lack of any endearing character to give you an immediate handle on things mean it's more abstract and less instantly-appealing than, say, Plotting. Working your way through all the early screens to get to the one that's stumped you can be a bit of a bore too.

That said though, it's a very clever and addictive little game, worked out perfectly, programmed well, and, for what it is, damn near perfect. We may have given inferior puzzle games higher marks than this before (perhaps because we hadn't seen so many similar ones at the time) but if you liked Klax (which I don't think was as good as this) or Pipe Mania (about same standard) then you'll certainly go a bundle on Puzznic. If you didn't, you probably won't. And I can't say it clearer than that.

Unspectacular but very addictive little puzzler. If you like that sort of thing (and we do), excellent.