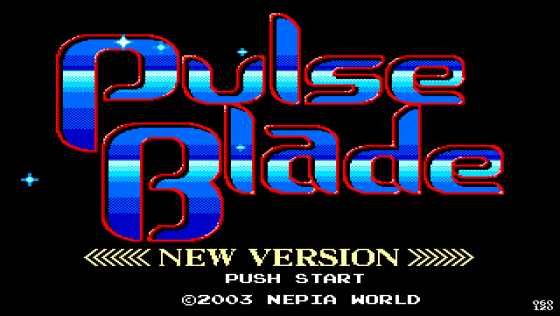 Another previously full-price retro shooter gets an official freeware re-launch!

Space, the final frontier. A place for new hope, new dreams and... Nah, it's a place for arming yourself to the teeth and heading on out to kick some alien butt! And Pulse Blade boldly goes to continue the long, brave and somewhat suicidal tradition of launching a single fighter to do battle against the alien hoards from the Tixilyx system or wherever... Did anyone ever read the manuals on these things or care who was getting splattered this time?

Pulse Blade is probably best described at an attempt to take a current scrolling shoot 'em up and 'skin' it to resemble a NES game; in fact this is possibly what would happen if a Ninty programmer from the 1980s had been plucked out of time, spent a few sweaty hours playing some of the more recent Dreamcast shooters before returning and vowing to attempt to reproduce those experiences. Because what we have here is pretty much a hybrid; a game that shares a lot of the aesthetic details of the early NES-era games even to the point of sounding and, to a degree, looking like one but which feels and indeed plays more like a much newer game. The ship itself is highly manoeuvrable, tooled up and ready to burn straight out of the box and there is very little play on power-up weapons, traits shared between both 1980s titles and the cream of the current crop, but the player's bounding box (the area of the ship that registers as a hit if impacted) is very small because, as with those newer games, there is a huge amount of airborne, photonic death to scrape the paint off the ship with. Pulse Blade isn't a bullet hell shooter, but it certainly doesn't mess around when it comes to spewing bullets at the player!

The stars disgorged by the slightly out of place wooden crates that appear on the backgrounds don't simply accelerate towards the bottom of the screen, they are instead attracted to the ship and therefore easier to collect. It's also possible to 'chain' the stars, each star is worth 100 points more than the previous and collecting ten in a row will give the already good death-dealing capabilities of the ship a bit more kick by giving it a few more bullets to play with and spreading the fire wider. Each subsequent star collected when the more powerful gun is online will be worth 1,000 points more than the previous (up to a maximum of 10,000), but should the player miss a star that has been released from a crate, the current chain then breaks - the next star being worth a meagre 100 points and your weapons are returned to their original power level. 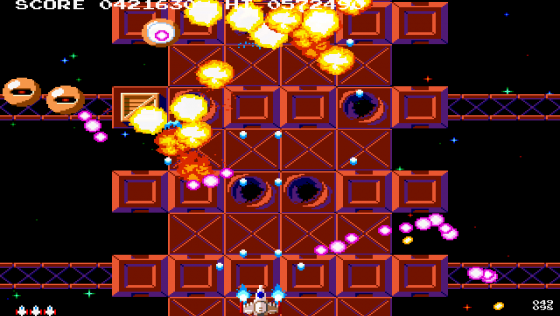 This attention to detail and the slew of little features borrowed from shoot 'em ups throughout time produces something that is more than the sum of it's parts; a gloriously simple bit of blasting action that, apart from being weak graphically and unobtrusive on the sound front, delivers the goods wholesale on the shooty bang-bang level.

Yes, it's a total mongrel with inspiration taken from 8-bit era consoles (notably Astro Warrior on the Sega Master System or the port of Starforce that Hudsonsoft did for the NES), whilst other ideas are very much rooted in the present and donated by games like Ikaruga, Zero Gunner 2 or the Psyvariar series. But like certain brands of poncy coffee, the ingredients have been skilfully blended together to make something quite special and absolutely nothing has been wedged in at the expense of the gameplay - in fact, the only thing that might be an issue for some players is the difficulty level; it starts off hard and things only get busier from there! But again, that's well within the tradition of the games that make up Pulse Blade's genetic history and, for more seasoned shoot 'em up players, a challenge is always a good thing. It scores low for graphics, sound and concept, but the gameplay is where it's at and that's nicely done indeed.

I wholly agree with T.M.R's review (apart from the score for graphics - they're not that ugly!), but there are a few extra points that weren't raised which I feel inclined to mention. First of all, Pulse Blade supports the use of a joystick/pad - and it really is much easier to play when using an old-school controller like the ever-popular USB Competition Pro joystick. This results in a far more authentic retro-gaming experience and you can also save yourself from developing RSI by using the auto-fire button (if you have one).

Secondly, the game is a Japanese release and therefore the manual and configuration program will be illegible to the majority of Western gamers. However, don't let this put you off - the game-play is simple and the game settings can be easily figured out via the good old-fashioned method of trial-and-error.

Finally, you may be wondering why we've reviewed a game originally released in 2003 in a discmag that's supposed to focus on *new* games. Well, admittedly the game is a few years old, but until recently it was actually only available to the non-paying public as a demo. Pulse Blade was initially a shareware game, but the developer has now kindly released the full version for free - hence the 'New Version' sub heading on the game's title screen.

Anyway, technicalities aside, Pulse Blade is a great little game that will provide a challenge to even the hardiest of shoot-em-up veterans.

T.M.R has already alluded to the similarity with the NES version of the arcade game Star Force. Well, I take part in a competitive retro gaming league (www.retroleague.co.uk) and a couple of months ago we played Star Force via MAME and I would probably go as far as to say that this is almost a straight update of that game. I saw absolutely nothing new that Tehkam's 1984 game didn't have and even the graphics were merely redrawn versions of those from Star Force.

However, that is not a bad thing. Though basic, it is still great fun to play and I would recommend it to anyone who has 10 minutes to spare on a game that requires no thought or strategy, just shoot and collect. It is probably a bit easier than the original and the gameplay feels smoother. I don't see much in the way of long term interest, but anyone who likes old-style vertical shmups without all the fancy trickery and impossible bullet-fests of modern games in the genre should give it a go. I guarantee that you will have fun, even if it is only for a short time.

Not much in the way of long term interest, but anyone who likes old-style vertical shmups... should give it a go. 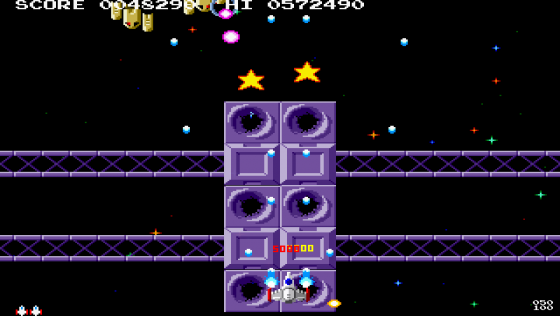 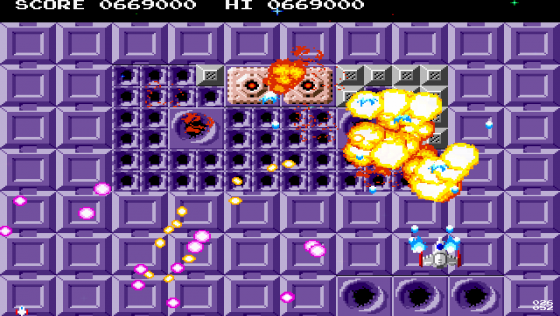