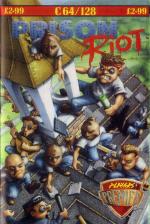 What strange ways these software houses have. Not too long after the real thing, Players reveal how they would handle a prison riot. Not for them the softly softly approach, no, just send in the riot squad and crack some heads. Then there's you, armed with a gun to shoot the prisoners of the Joe Blade-style, flick-screen jail.

If you run out of ammo you can just jump up and kick them in the head! Otherwise, contact with prisoners (or their booby traps) reduces your energy. Ammo and food can be found though, along with a boot which improves your running and jumping abilities.

Of course, your aim isn't to kill loads of prisoners (though it would probably ease overcrowding!) but to catch seven ringleaders. When you find one, an arrest is made by solving a puzzle! - a 9x9 grid with the letters of PORRIDGE is shuffled and you must slide the rows/columns to restore part of the word (more with each successive ringleader). Then you can lead the ringleader to the edge of the roof where he is lowered by hydraulic lift.

The best thing about the game is its sick sense of humour: the police siren title 'music' to the inmates (with sacks over their heads) throwing slates from the wrecked roof. Arrested ringleaders even wave goodbye when lowered by the lift!

But nothing can disguise the fact that this is just a modified version of the ageing Joe Blade, with the same (admittedly playable) combination of arcade adventure and puzzling sub-games. Graphically, the game also resembles Joe Blade, albeit the Spectrum version with limited, often sickly colour schemes like green and red - you start to understand why the prisoners rioted in the first place!

With its limited, often sickly colour scheme like green and red, you start to understand why the prisoners rioted in the first place!