﻿ Powerplay: The Game Of The Gods (Arcana) Review | Zzap - Everygamegoing 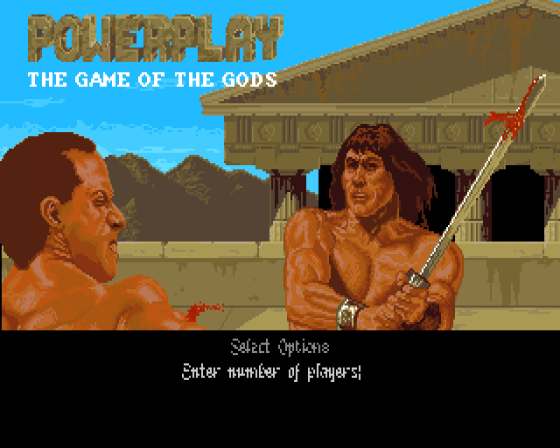 Instead of the harmonious strains of pipe music and ambrosial melodies, Mount Olympus is echoing with loud voices, the clash of armour and unmentionable four-letter words. There's one four-letter word we can mention though and that's Zeus (you know - the one with the beard and the thunderbolt). Bored with all this quarrelling, he's devised a contest to shut them up once and for all.

The new enhanced version of Powerplay (the original Amiga game was released last year) features 21 hand-drawn portraits of all the characters in addition to improved graphics and more finely animated challenge screens. Play itself remains pretty much the same: up to four players choose a dificulty level and pick a team of warriors from a suitably godlike selection.

Gods take it in turns to decide on a piece and answer a trivia question. Get it right and you're allowed to move the appropriate character one square in any direction on the multi-coloured board (different colours represent different trivia suspects). As questions are answered correctly, each character accumulates wisdow points; a score of 25 or more gives you the option to mutant to a higher grade of character (and there are some pre-tt-y UGLY ones on later levels). 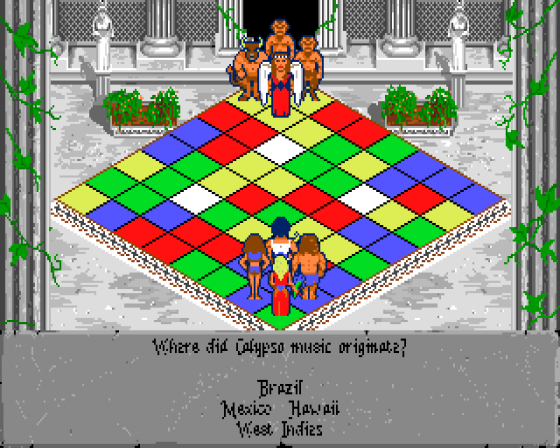 If you concentrate for too long on a particular piece, other members of your team begin to get the hump. Occasionally they'll start moving about and stretching their legs of their own accord. Try to move on to a square occupied by an opponent piece and you're in for a fight... well, a challenge really. As if by magic you're transported to the site of a blazing lava pit or a gorgon's lair. The players compete against each other to answer the same questions. The more questions you get wrong, the closer you get to falling in the lava pit or being turned to stone by the gorgon's fatal stare.

Lose a challenge and you're demoted a character grade. There's no grade lower than one so if a grade one piece loses a head-to-head it vapourises and disappears from the board.

There's just one snag. If you make all your opponents disappear there's going to be nobody left to praise the smartypants. Serves you right, clever clogs! 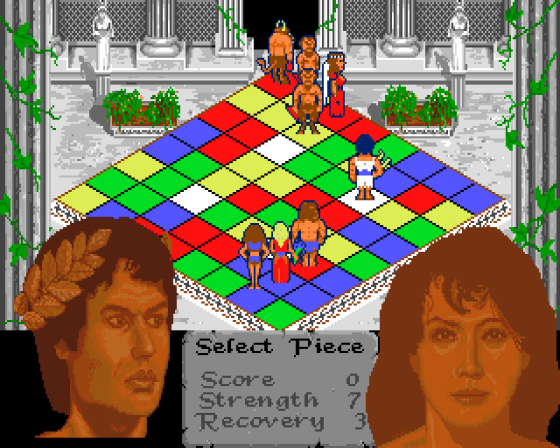 As I've been hooked on trivia games ever since I watched my irst episode of Sale Of The Century, I could hardly control my excitement when I heard about Arcana's latest release. (It hasn't got Nicholas Parsons for a start!) On all formats, Powerplay is still the best fix of computerised trivia around - it manages to involve all the players all of the time and doesn't give hours of playing time to the smarmy smart-alecs who've tried to memorise the questions beforehand (like Paul).

Having said that, the new enhanced Amiga version isn't all that different from the original. The character portraits do add a bit of interest but one of the challenge screens has been sacrificed for the extra animation - and a few more sound effects would have added to the atmosphere. This is probably the smarter version of the two but don't bother buying if you've got the original.

At least the C64 version of Powerplay had a sense of humour - you'd have to go far to find much illier challenge music - which is basically what made it fun to play. 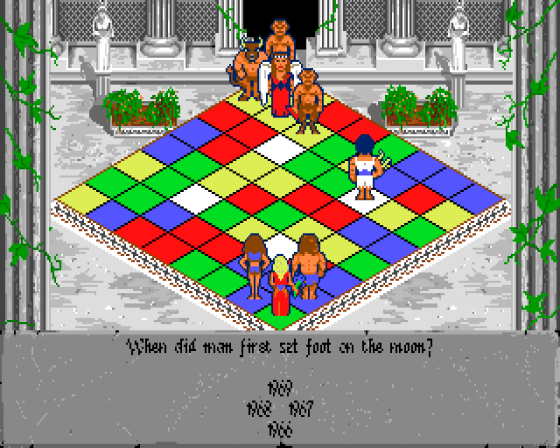 Apart from the graphics, which do look pretty good, all the other Amiga improvements leave me cold. The way the characters keep going off and walking about on their own, creating a challenge when you most definitely don't want one (i.e. have zilch strength) gets pretty annoying - probbly why they caled it irritatbility factor. There isn't any sound to speak of and the slowness of the action gave rise to one or two hefty snores.

Unless you're a trivia addict, think before you grab this off the shelves.

This was one of my all-time faves on the good ol' C64, because it wasn't just a literal translation of a question and answer game - it was also fun! I particularly liked the jolly challenge music, something which this version lacks (and suffers as a result) - in fact, it's on the whole less cute 'n cuddly. 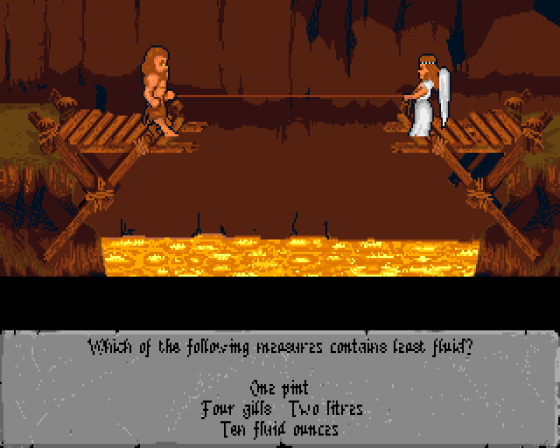 However, this more formal 'epic' approach works extremely well, not least because of the superb pics of the challenging armies. The random element adds a touch of fate which can sometimes be annoying - but then, what would the game of the gods be without Fate?

The clever question and answer system and the levels of difficulty mean that even if you think you know the answer, you're pushed to find it in the time allowed. On the whole, it's the kind of game *I* go crazy over (being an aspiring smart-arse), and if you're into trivia too, check it out.

Presentation 88% Up to four players can choose a godlike array of warriors to fight over a range of difficulty levels. Practice option and a digitised end-game message from Zeus.

Sound 55% A few sampled effects - nothing to write home about.

Hookability 86% Designed to make you want to beat your know-all opponents to a pulp.

Lastability 79% A huge question file ensures hours of fun - if you can still persuade your friends (?) to play, that is.

Overall 82% For for the gods - but not if you've got the other Amiga version...

On all formats, Powerplay is still the best fix of computerised trivia around. 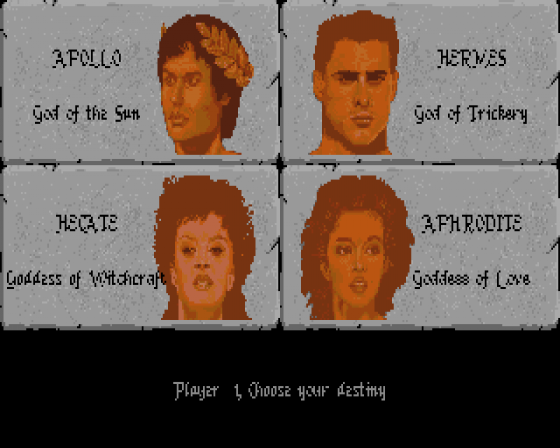 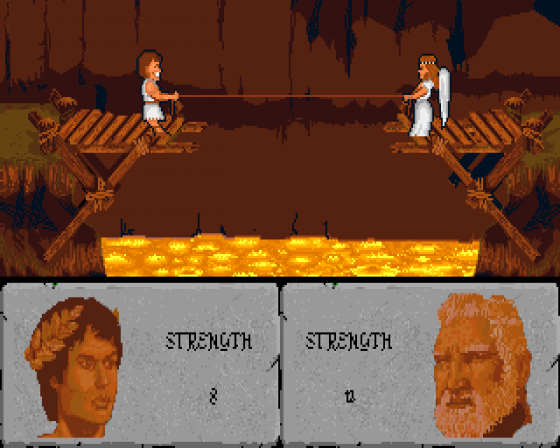 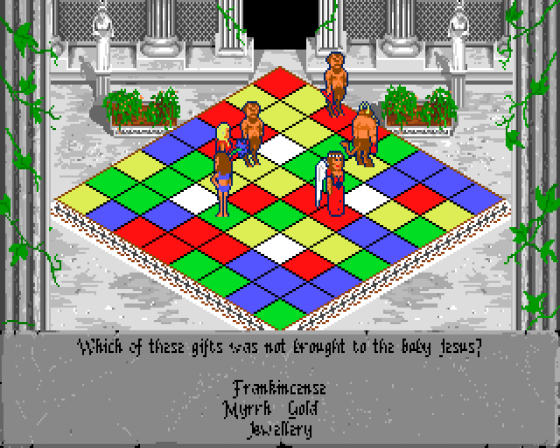 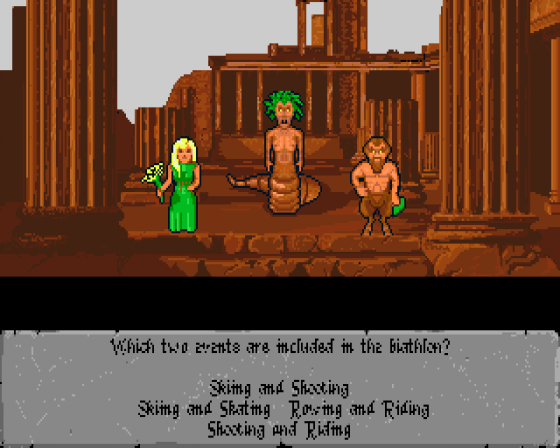 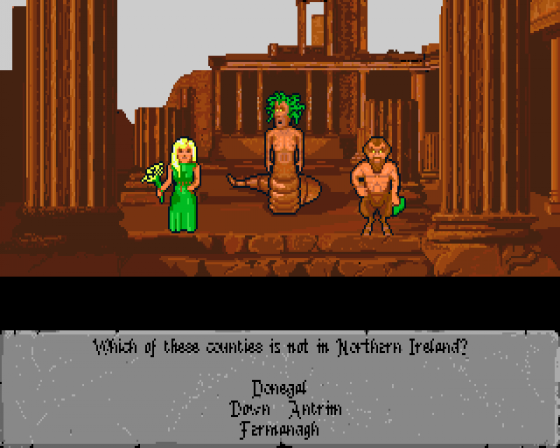