1st March 1986
Powerplay: The Game Of The Gods
By Arcana
•
BBC Model B 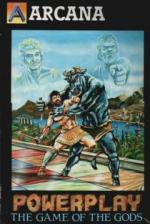 High above the clouds shrouding the summit of Mount Olympus, a battle rages between gods - a battle of intellect which only the wisest can win

The ancient ethereal gods of the classical world were wont to use mortal pawns to settle their immortal quarrels. This is the inspiration behind Powerplay: Game of The Gods, a new game from Arcana Software Design. Now we can play at being gods. In the modern world, hand to hand combat has been replaced by joystick to joystick. Like gods, we sit aloft controlling our video sprites.

The scene is Mount Olympus and Zeus has decided upon a novel (he wasn't the most imaginative god, just all powerful!) device for settling quarrels between his fellow heavenly inhabitants. You know how luxury can get boring and there's nothing like a good god fight. In Powerplay, each god (that's one of four contestants) controls four characters. You start off with three Hercules, a sort of ancient Rambo but mortal - actually he was a hero, half human, half god - and one Cyclops - next in rank, a huge one-eyed giant with the strength of, say, Geoff Capes.

The top two ranks, to which all your dumb characters aspire, are Minotaur - half man, half bull and Satyr - a demon of the woodland, half goat and half man, endowed with mystical ability and that's all, thank the gods, this is a family game!

Powerplay is exceptionally well presented. The programmers must be admirers of Elite. The opening Arcada screen has a solid three dimensional capital A, with hidden line removal, doing spaceship type manoeuvres, stunningly good and vying with Elite and Castle Quest for the best intro screen of 1985. Then comes the Powerplay buildup sequence. A Hercules character pushes the letters of Powerplay - which look as though they are off the set of The Flintstones - into position. Then a moving hand traces "Game of the Gods" and finally the four characters are introduced with the Powerplay sign sinking out of view. This cycles round with background music chirping away.

Once you've admired the graphics, you can move pretty quickly through to the options screen which accepts information about how many players (2 to 4), level of difficulty (1-4, 10 seconds - 2.5 seconds) and input devices to be used. The game supports keyboard and one or two joysticks. You highlight each player in turn and hit Return until the correct option appears. Let the contest begin!

The arena that Zeus has chosen for Powerplay is tastefully (he wasn't the most artistic god but, remember, he was all-powerful!) decorated with statues and all sorts of ornament befitting its status. You even get a bowl of flowers in any unoccupied corner! Back to Elite now. The venue is super four colour but below, where the quiz questions appear on a scroll, it's two colour only. The slight flicker on the line between the two indicates "split screen" programming with two graphics Modes on the one screen.

The graphics in the game are marvellous. The programmers were responsible for such favourites as Krazy Kong and Mr. Ee and their skill has produced some nice intro screens and a super game screen. The characters are made up of different sprites so that they can be viewed from various angles. They are also drawn in a way which gives them a solid appearance rather than flat and side on. The courtyard scene is depicted in such a way that the player feels he is looking down upon the action. Pieces, when selected, jump up and down on the spot as a reminder.

Design too is thoughtful. There are a multiplicity of choices and moves to be made in any one game. Joysticks ease the problem but keyboard users needn't worry too much. Use of Space Bar to select, Return to confirm and the cursor keys to choose from the four possible answers to each question simplifies matters and makes the game very easy to play.

As well as the title music, a neat little ditty in its own right building up to a dramatic crescendo on the title page, the program incorporates chunks of speech for those computers endowed with the Acorn speech upgrade. The manual is easy to follow with step-by-step instruction and reference section.

Powerplay contains 2,000 questions on the subjects of general knowledge, sport and leisure, science and technology, history and geography - not mythology? And, if you require a subject of your choice, there are full instructions on how to use the in-built compiler to create your own, although you'll need a wordprocessor or text editor of some sort to achieve this. It involves listing the questions, their alternative answers, the correct solution and subject areas in a strict format which can be read by the Powerplay processing software.

It's quite easy to do and extends the usefulness of Powerplay as a game format tremendously. The subjects can be topical, up to the minute news or sport and their level of difficulty carefully chosen to suit any age range.

To become "Wisest and Most Powerful God of All" bar Zeus, you have to build up the wisdom of your characters by answering questions on their behalf. Once they are 25 points wise, they can mutate up to the next character stage. Hercules (should be Herakles if this is Greece) becomes Cyclops, Cyclops becomes Minotaur and so upwards. The strength of your pieces is then crucial in the battles you will inevitably have with your opponents on the board.

The playing area is like a chequers board but with different coloured squares. Each colour of Blue, Red, Green and Yellow represents a different subject area for the general knowledge question that must be answered each round before your character is allowed to move. Get it wrong and he stays put. If the piece is moved onto one of the four Cyan squares then it is randomly "beamed", Star Trek style, to any one of these squares; it could be the same one.

So each round goes: select piece; answer question (difficulty determined by strength of piece, time limit previously set at options screen and subject according to colour of square); if correct move your piece, otherwise the round ends. If your move takes you onto an opponent's square, a challenge is invoked.

A challenge isn't quite what you might think, a bit of an anti-climax, no zooming off to some alternative screen arcade battle but an intellectual duel; first to answer a randomly-generated question (difficulty determined by value of strongest piece). The loser mutates down a strength (or out of the game if it's a Hercules).

That's the aim of the game; to grind down your opponents with superior answering power, a trivial pursuit, but great fun, especially with four players on the board. Once all your opponents' pieces are eliminated from the courtyard you are champion god and presumably should wear some gilded laurel leaves around the winning head.

The thought must by now have occurred to you: how do they do it in the memory? Well, unfortunately the game is for disc systems only. The version we reviewed was, and I quote "unsuitable for this machine" when !BOOTed on a B+. It's probably just a test for Operating System version so Arcana can do the sensible thing and make it work on the B+. It was a dual format 40/80 protected disc so no backups possible. Unfortunately the format resulted in problems reading the disc with double-density interfaces. Certainly the 80 half of the format is useless with the popular DDFSs. The problems continue in 40 track drives when accessing the questions on disc. Disc fault messages, handing up and white out all occurred. No error-handling for this situation either. Hit Break or CTRL-Break to !BOOT back into the title screen. So if mum wants to use the wordprocessor, she'll have to turn the computer off first.

Powerplay is a very welcome addition to my games library, especially because I can play with friends or the family rather than take a solo cruise in space or pressured ride around Silverstone. Usually quiz games are boring because little thought has gone into the style. Powerful has got plenty of that.

Brilliantly presented, Powerplay blends a simple strategic element with 2,000 standard (though well chosen) and potentially unlimited multiple-choice questions. The most original of all such games currently available and unlikely to be matched.