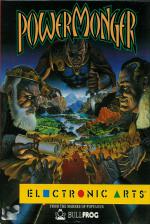 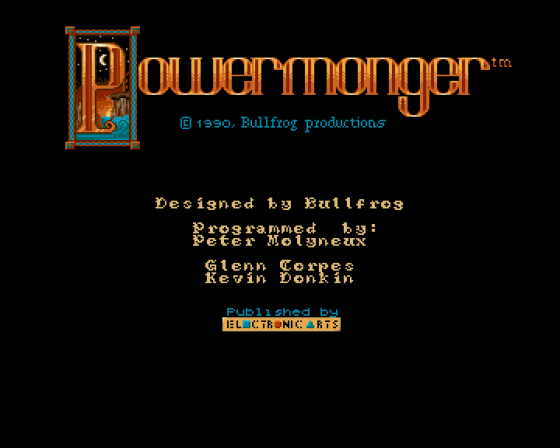 The sequel to the enormously successful Populous, Powermonger was actually conceived during the development for Populous and has many similarities in graphic viewpoint as well as the control system. The suitably power-mad plot concerns your arrival in a new land ruled by various tinpot leaders. Since you were a king in your old realm, you decide to show these leaders what war is in a merciless drive for conquest.

The world of Powermonger is composed of a whopping great map divided up into 195 different territories. You start at the top, left-hand corner of the map, working your way down until you reach the most difficult territory positioned in the bottom, right-hand corner.

To gain control of each territory you must bring two thirds of that territory's population under your control. You do this by roaming over the territory's habitable areas conquering armies, village populations, etc. With each conquest a small set of scales will tip in your direction indicating the percentage gain towards victory. 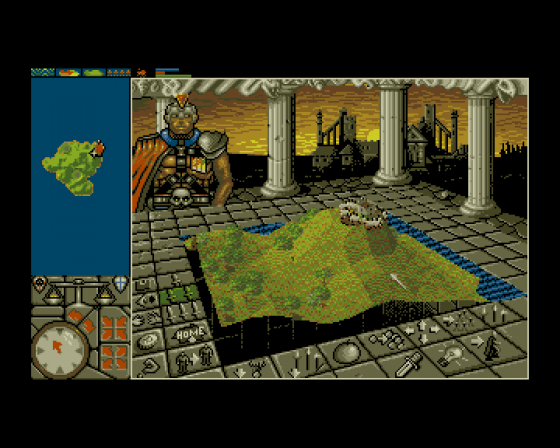 Combat is an automatic affair. You just click on the "attack" icon, point to the desired spot and watch your army launch an offensive. If you win, food can be taken from village stores and surrounding livestock. Any villagers who have not been slain are recruited to the cause. If a village has a workshop new weapons can be invented and constructed via the 'invention' icon. In this way, you can steadily upgrade from pikes to cannons. Inventing takes advantage of the surrounding natural resources. So if your men invent pikes you will notice them chopping numerous trees down. Metallic weapons will need the assistance of a nearby ore mine.

In all actions, your posture will be the most important variable. So in combat, an aggressive posture will, more than likely, result in all of the defenders being put to the sword while a passive posture will spare as many as possible. Similarly, you have the option to trade with a village rather than attack it. Settlements will trade items for food. Here, an aggressive captain will trade a cannon before a passive captain will, for example.

Apart from the original captain that you start the game with, you also have the option of utilising any of the defeated captains that decide to defect to your site. Each captain is rated for strength (or life force), the amount of men under his command and the amount of food carried. A status box can be accessed which displays further captain stats such as aggression level and speed.

The Powermonger perspective is an improvement on the novel Populous 3D. Now you can rotate the view, as well as zooming in/out. Powermonger also boasts weather - rain and snow come and go with the seasons. Rain will affect the speed of your marching soldiers and, of course, food will be hard to come by in winter.

Powermonger is a very addictive game to play. Graphically and aurally it is excellent. For example, you will see and hear tiny sheep grazing and bleating. Your men may disturb a flock of birds as they trudge through the landscape whereupon you'll see and hear the birds as they rise into the sky (their shadows receding on the ground). However, I do have one or two reservations. Firstly, considering Powermonger is a wargame there is a dearth of tactical play. I can understand Bullfrog wanting to appeal to a wider audience than the normal wargame specialists, but just to have your men fall upon every settlement as a rowdy mob is stretching things a bit far. The only essential tactical combat variables tend to be weapons and the numbers of soldiers involved. Even a few simple, tactical formations would have been handy (and more believable).

In addition, I considered the reports to be lacking in certain areas. For example, if I asked my men to invent something why didn't they report back to tell me that they had just invented 'X'? The only way I could analyze this information was by clicking on individuals or the workshop itself to see what each man was carrying or what stock the workshop contained. Even then I was confused as to exactly what had been invented in the first place.

Powermonger is a very good game that has immense value for money and many unique and well-designed features (such as the seasonal changes). However, the niggly aspects take some shine off of what could, and should, have been a Sizzler.

A very good game that has many unique and well-designed features. 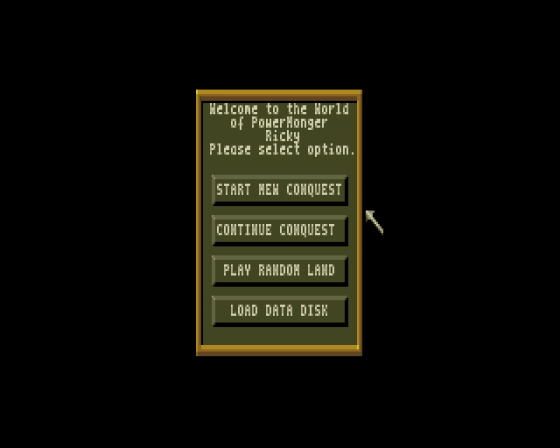 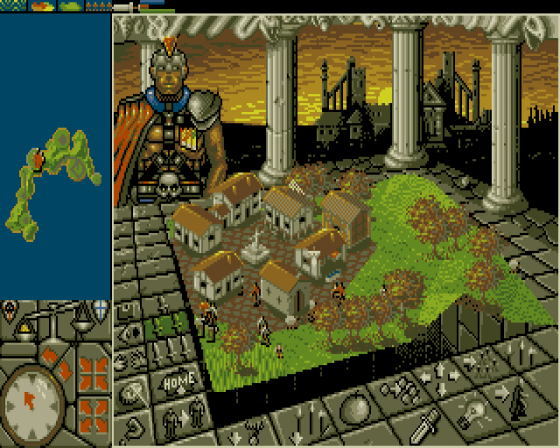 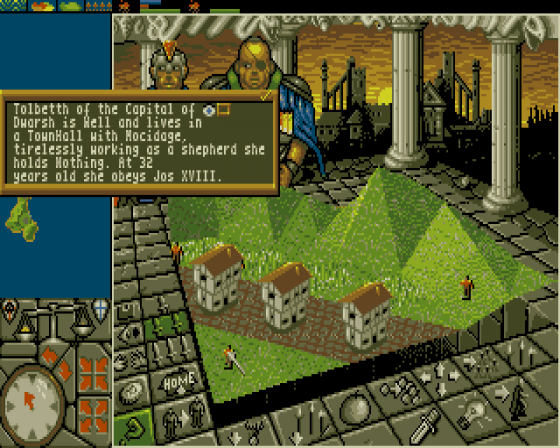 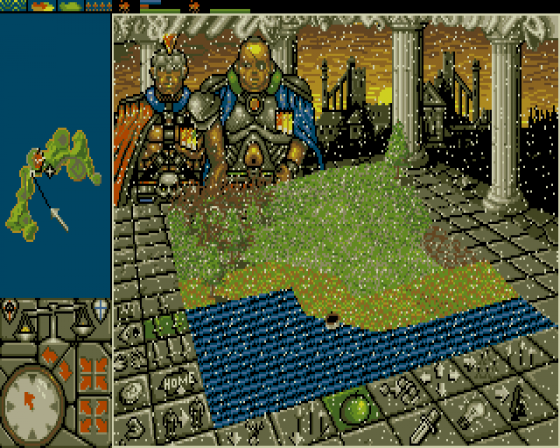 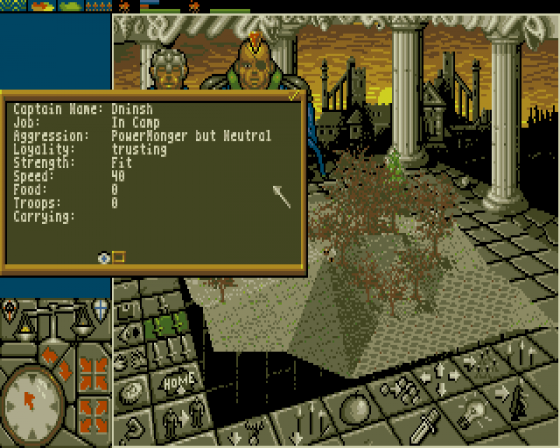 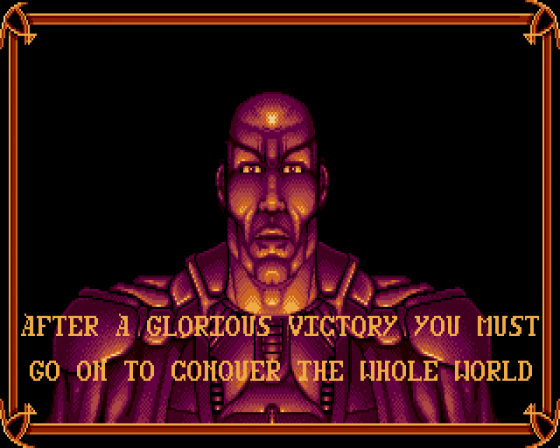 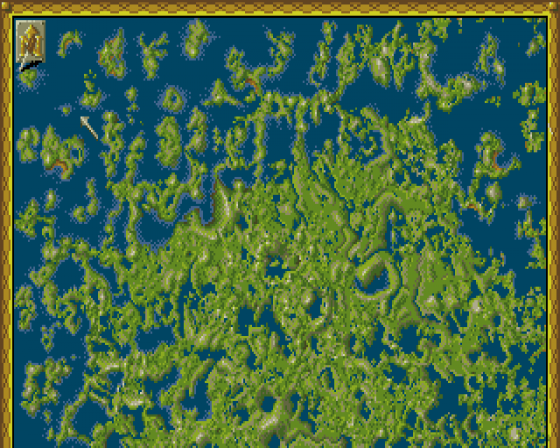 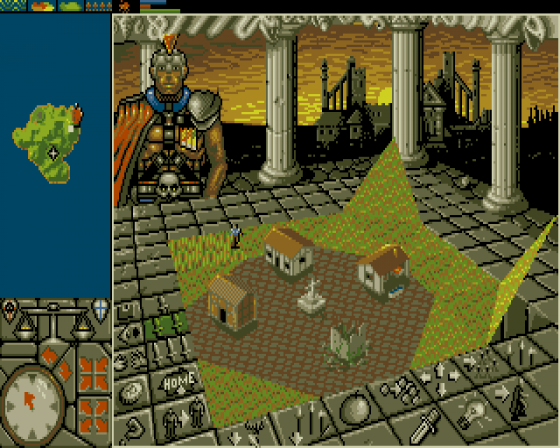