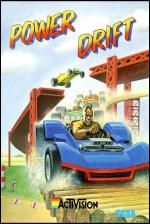 Power up for the best C64 race game yet

Well you must be feeling on top of the world right about now. You've driven your Ferrari across California in record time, ridden rough shod over some of the gnarliest Moto Cycle Cross courses in the world, hell you've even decimated an entire air force at the request of the US Navy. But now let's see the *true* stuff that you're made of. Yep, this time Sega have cooked up a real tough one for you - we've put you in for the Power Drift league.

We've heard a lot of good reports about your driving skills but can you handle a hot rod with a souped-up engine and the heart of a 4x4? Sure you can, but be warned, you're not the only one out there with the need for speed.

Power Drift is played over five different courses with five different circuits to be found in each course. At the start of the game, any course can be chosen and any one of twelve drivers can be chosen from to take to the hot seat. Revving up at the start with the other eleven all around you, it's now or never. Putting the pedal to the metal, 224km/h worth of engine roars up and the opponents eat your dust.

Round the first bend, you deftly slam the car into high gear and the others are far behind. Taking the second bend doesn't leave much paint left on your car, but what the hell? - this buggy can put up with a lot of damage! Only a head-on collision with a sign, tree, post or another car can spin this baby off the road. Woah! Over a ramp you go and the car is flying! Back down to the earth and the buggy is really roaring along now with the tyres smoking round the corners. Past the start line again and it's the second of four laps underway. Uh oh, here comes a dawdling car but he's moving so slow he looks like he's going backward and *you're gonna hit him*!!!!

Spinning off the road is a new experience which you can do without and now you're down to fourth place - if you don't end up in the top three then you're out of the race and can find your own way home mate! Those rival cars sure are fast and like you they take those bends with no thought for safety; theirs or others! When you burn past that third-placed driver, show him what you think of his driving with a 'suitable gesture'. (Whadd'ya mean it ain't suitable for a family mag like this? Just do it!)

Those high rides sure are fun but don't forget that you're talking stratosphere in height so don't wander too near the edge of the road unless you want to fly. It's not an F-14 this time boy!

Lap three follows and lap four begins - you're in second place and the leader is burning around the course, over hills, round twisting bends and under bridges. No time to admire the scenery, even if it does remind you of relaxing palm beaches. Just go flat out!

The computer-controlled leader crosses the line and is displayed in all his glory as 1st, just to rub it in. Never mind second is respectable but no time for a breather - it's off to the second course and after that another three more. This time, watch out for the slight gravity going round corners - the effect is gonna get a heck of a lot stronger so get practising now or else. With all these hills, bumps, and bends you're in for a bone-shaking roller coaster ride.

Complete all five circuits and the next course beckons. Fancy turbo-ing around the bridge course or rocketing through the palm beach circuits, or how about a desert burn up with your hair blown back (who needs hair dryers?!). Take your pick of the next course and change the driver if you want, but go all out to win that trophy. *Go for it.*

Well it's a toss up between this and Chase HQ for Xmas, but Ocean's coin-op conversion will have too be pretty spectacular to beat this immensely fast conversion. It's great to see that most of the coin-op's features are in there: the ramp, spinning off the road, falling off edges, and even the driver selection option complete with individual gestures!

On the negative side I'm not too sure about the depth of play and long term variety of the gameplay but the coin-op was to fault in this respect also.

Considering what Chris Butler has done in one load, you can't fail to be overwhelmed by it all. So what if the graphics don't move past with 100% precision?

Considering the C64's graphical limitations, Chris has attempted the impossible and succeeded in very fine style. The speed and fun of the coin-op is all there and that's what counts in this true roller coaster of a ride.

Afterburner is my personal favourite in the arcades, but that was a disaster in the process of conversion to the C64. Now we come to Power Drift, and, having played the arcade machine to death, I was highly sceptical that it could be done at all.

Once again, I am proved wrong and deservedly so with what must be the best 3D racer yet to grace the Commodore. Sure, it hasn't got all the extensive arcade graphics, but programmer Chris Butler has gone all out to retain the high-speed action, and as such, the pace and spirit of the coin-op have been kept perfectly intact. The superb sprite of your car and driver is well animated with other cars rushing past at speeds beating the coin-op (I'm not kidding). The side graphics have considerable detail, although you have to stop to really appreciate their quality, much like the coin-op really!

Wonderful stuff that does Activision and the C64 proud.

Once again Activision have entered the Xmas fray with a lot of credibility resting on an 'impossible' Sega arcade conversion.

I found the C64 version quite a bit easier to get into than the coin-op with very few prangs or sharp corners to cost you the race. However, on later circuits the gravity effect of bends makes its presence felt and at 224km/h it's no picnic, I can tell you.

It's a great shame that the effect of climbing hills is spoiled somewhat by the lack of side graphics. However, this doesn't stop the enjoyment as you ride to the top and, in true roller coaster fashion, subsequently plunge over the other side. The speed of the game and rush of oncoming cars and hills is enough to keep your stomach hanging in mid-air for most of the race!

The limited sound effects are disappointing although the ongoing music is well above average. And in unfair comparison with the coin-op, any loss of variety in the graphics is hard to notice as each course is markedly different in style with bridges, rock faces, palm and pineapple trees, and road signs all mixed up to ensure variety throughout all 25 circuits. And all this in one load! Truly amazing!

Presentation 94%
25 circuits spread over five courses with twelve characters to choose from and all in one load - need we say more?

Sound 78%
The few effects that are present are well done wth a good tune to accompany the racing action.

Hookability 94%
From the moment you press the fire button, any doubts are swept away with the dust churned up at the starting line.

Lastability 92%
The gameplay can get a little too familiar with prolonged play, but no course is ever the same to play or see, and the game always provides a very strong challenge.

The speed of the game and rush of oncoming cars and hills is enough to keep your stomach hanging in mid-air for most of the race!