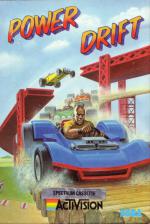 Great in the arcades, but tricky to convert, this is Activision's racing entry into the Christmas stakes. No posey Ferrari F-40's or Porsche 959's here though, just you in your souped up road buggy against eleven equally mean drivers. No standard race tracks either, but bone-jarring dips and crests full of bends and obstacles.

Start by choosing to be one of twelve drivers racing on one of five courses with five stages on offer. Choice made you're whisked to your vehicle and the hot seat. The eleven other drivers bunch around you on the grid, the green light flashes… and the race is on. The aim is simple, finish in 3rd place or better, and you will be taken onto the next stage (fall and it's game over). At around 150kph slam the car into high gear and push it to the limits (around 244kph). Avoid contact with other racers and roadside obstacles - they'll cause your car to spin off the road losing you valuable time.

Four laps must be completed to win a race. You tell your position in the pack by simply glancing up to top of screen where a representation of your character's face amidst the others I had great hopes for Power Drift. Despite the many arcade racing games around this Christmas it had a real chance. But while graphically the game is ok, all five of the courses look too similar. The car sprites are quite well defined, but one would have thought the programmer could have set the tyres spinning: it looks like the scenery is moving rather than the cars. While not wanting to be too negative about what in the arcade is a great game, I feel the Spectrum Power Drift lacks long term playability and Activision aren't onto a big hit.

'Brrm, brrm, screech! Yeah, my favourite arcade machine of all time converted onto the Spectrum. The one we've all been waiting for. But is it any good? You bet your life it is. It's true that at first the game looks very much like WEC Le Mans (it was programmed by the same team), but the similarities soon end when you face a steep bank of logs to climb up in your buggy! It all moves so fast you don't even get time to moan about the use of colour; you just concentrate on skidding around corners and leaping over hills - great fun. Nobody believed Activision could reproduce the graphical excellence of the Sega arcade machine, but they've dome a really good lob with detailed buggys, smooth scrolling and stomach churning hills and curves. Sound is also brilliant with a good Dave Lowe tune (any relation to Chris?) and plenty of sound effects. Power Drift is another top quality arcade conversion. I hope I find this one in my Christmas stocking.'

The car sprites are quite well defined, but one would have thought the programmer could have set the tyres spinning: it looks like the scenery is moving rather than the cars.