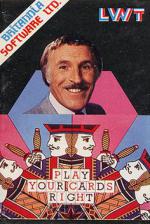 Britannia Software started out with a Spectrum version of the TV Quiz show Blockbusters now they have expanded their TV tie-in activities with a version of Bruce Forsythe' s Play Your Cards Right.

When the program has loaded you are greeted with a large picture of Brucie himself, leering out of the screen and inviting you to play the game, accompanied by the Spectrum's rendition of the theme tune to the W show. Once you've chosen whether to play against the computer or a human opponent and have entered names appropriately, the display flips to the question screen. Two large digital displays occupy two thirds of the screen, with an area below used for text.

The digital displays, one for each player, emulate LEO displays as found on calculators and consist of blocks which light up to form numbers. A question which was asked of a group of one hundred people is flashed onto the screen. One player has to guess how many people answered 'yes' to the question and enter the number into his display. The other player then has to decide whether the actual number of positive responses to the question was higher or lower and press H or L followed by ENTER.

If the player guessing whether the responses were higher or lower gets it right, then he wins and has first go on the next screen where both players are presented with a horizontal row of five cards. On the card screen, players guess whether the next card in their line will be higher or lower than its predecessor before it is turned face up. A player can change the current card once during his turn, and can freeze play at any point, carrying the cards that have been turned face up over to the next visit to the card screen.

The aim is to to get all five cards turned face up if a player guesses the value of the next card in sequence incorrectly then all his cards except the first one are turned face over and replaced with new ones before control passes to the other person. If neither player manages to get all five cards face up on the card screen, the game returns to the question screen, another question is flashed onto the screen and the game continues as before with the players changing places.

If one of the players gets through the card screen then he gets a chance to gamble the points collected on the final screen, where bets can be laid on the turn of cards. The game ends when the winner runs out of points to gamble with or has turned all the cards face up.

What do points make? Prizes. Well, not in the computer version of the game...

Not an enthralling game, I'm afraid. You've only got three screens to play on and the replay is hardly demanding. The programming seemed a bit shoddy too - if you don't watch very closely when you're playing the computer the response you are asked to go Higher or Lower on is overwritten. Not clever. The computer can be a bit dim when it's playing - I put in 00 on the question screen once, and the computer said the number of people who answered was lower! I suppose this game might be fun for a group of telly addicts or maiden aunties, but it's not for me. I don't care what Brucie says: Tonight's not going to be a good night if I play my cards right.

Before playing this game, I thought it might add to the 'popular' TV series, but it's pretty much the same. A recognisable version of the TV show, with a reasonable theme tune and a neat characterisation of Brucie on the intro screen. Unfortunately, I'm not a fan of the programme. An aggravating aspect is that sometimes during calculations, the last prompt remains on screen, giving the impression that the computer hasn't accepted your input. Parts, I suspect, are in BASIC or were compiled into average code. I didn 't really enjoy playing it alone, but the game is more fun in pairs or with two teams. (Even better with a studio audience...)

The TV series is one of my favourite programmes on telly at the moment, because of the great amount of audience participation, but a computer version couldn't really allow for this. Consequently, Play Your Cards Right didn't really turn out to be much of a success in my view. The question screen only displays the guesses and not the answers, which can be a bit confusing at first. The fact that you don't know what option the computer took on the one player game means it's difficult to go higher or lower! Some things were lacking - like the Brucie Bonus and big prizes. And I missed the Dolly Dealers!

Control keys: H for higher, L for Lower, Number keys to enter your guess and gamble on the final screen, F to freeze play on the card screen, and C to change card Joystick: N/A Keyboard play: no problems Use of colour: simplistic Graphics : well detailed cards, little else Sound: silence, apart from the theme tune at the start Skill levels: one Screens: 3 General Rating: a bit yawn-inducing unless you're a real Brucie Groupie!

Not much of a success in my view. An aggravating aspect is that sometimes during calculations, the last prompt remains on screen, giving the impression that the computer hasn't accepted your input.