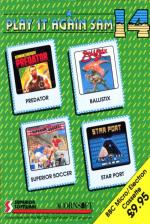 When you buy Play It Again Sam 14 you get Ballistix, Predator and Superior Soccer, all of which were medium-quality standalone games when they first game out. Now they are packaged together with a new game called Star Port, which is an arcade-adventure written by the author of Quest and Camelot.

The object of Star Port is to collect five cases of medical supplies which are dotted around a triangular-shaped space station, and then escape using a conveniently spare ship situated at the peak of the station.

The background story is familiar stuff. The Star Port has been attacked by alien forces, etc, etc, you receive an urgent distress call, etc, etc, the message fades, and then there is silence. Go to it, comrade.

Numerous robots wander around and unconditionally start shooting manically if you show your face. Show your fun instead. Exploration can result in some fonfusion because of the 'triangularity' - I keep getting lost. When you find you can go no further because of a blue door, it is time to put your thinking cap on.

The other face of this game is the complex puzzles which must be solved to advance a level. They consist of four inter-locking wheels, each of which holds four equally space letters. The wheels can be rotated, and the object is to end up with all nine letters in consedutive order. I tell you, it's one of those puzzles whose difficulty varies exponentially with the proportion completed. In other words the last letter is a real pain, just like the last square in a Rubik's Cube. And there's a time limit!

Sensibly, Superior has not attempted to release Star Port as a separate title, and it sits quite comfortably with its companions on the compilation. As arcade adventures go, Star Port is easy - I've heard that the author can complete it in under thirty minutes.

Star Port is a new title, and it sits quite comfortably with its companions on the compilation.
Logout