Published in The Micro User 7.03 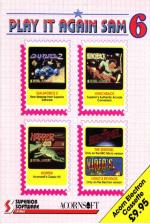 Play It Again Sam 6 and 7 are the latest in a line of successful compilations from the Superior stable. Both packages feature games from the dim and distant past of the BBC Micro, as well as fairly recent offerings.

Galaforce II is the successor to Kevin Edwards' bestseller and is available only on Sam 6. Like its predecessor, it offers an unpretentious diet of non-stop mindless destruction. In a nutshell, it's Galaforce in which absolutely everything has been improved.

Better sound, better graphics, bigger sprites, lots of nice touches and a staggering increase in speed all contribute to creating a more than worthy successor to the ever-popular original. Hardened Galaforce fans will recognise quite a few of the aliens and battle formations in the new game, but this similarity is largely an illusion: There are many, many new ships and patterns to be mastered.

One nice touch - an aid to players and reviewers alike - is the inclusion of a level jump facility, first seen on Crazee Rider by the same author. On your first game you can only start on level one but as you progress you can choose to start on any level between one and the highest you've reached so far.

Between successive waves you are presented with one or more objects that look superficially like large packing cases. Each requires two hits to destroy it - if you dare. They are sometimes benevolent - giving you an extra life, a 1,000 bonus and other such goodies. However, they frequently have very nasty side effects, such as robbing you of your up-down or left-right motion.

This second detrimental effect makes you virtually asitting target because the aliens come so fast that even aconstant stream of laser bolts isoften not enough todestroy the wave before one crashes straight through you.

The Sentinel could hardly be more of a contrast, requiring virtually no trigger skill. Strategy is the key - I once heard it described as the micro's answer to chess, and would be inclined to go along with that description.

The game's sheer size is almost beyond belief - 10,000 different levels, with not a multi-load in sight. The world of The Sentinel is displayed in superb 3D perspective with mountains, plateaus and yawning gullies to trap the unfortunate.

On a pedestal mounted on the highest point of the landscape stands your enemy, the Sentinel himself. He always stays on this pedestal but as soon as you make a move he starts to rotate. If he can see you, you're in big trouble.

The name of the game is energy - how to gain more as quickly as possible and how to keep what you've got for more than a few moments. You start with 10 units and can gain more - one at a time - by absorbing the trees and other objects placed randomly around the landscape.

You lose energy at the rate of one unit every five seconds when under the Sentinel's direct gaze. Your adversary is abetted by up to six sentries - smaller, less imposing versions of himself, but with equally deadly eyesight - stationed on lower promontories.

To move around, you create a replica of yourself at the cost of three energy units, and transfer into the new body, regaining the lost power by absorbing your previous shell.

The aim is to work your way up the surrounding terrain until you are higher than the Sentinel, at which point you can absorb him.

The Sentinel is quite simply one of the most brilliant and original games ever seen on any computer. Miss it if you dare.

I must say that I was rather surprised to see Hopper, Acornsoft's conversion of the arcade game Frogger, a real blast from the past. The idea is simple, you are a frog guiding a party of fellow amphibians to the safety of their riverbank homes within a time limit. You have to cross an increasingly busy main road, avoiding the cars and lorries. Once across, you negotiate a river by jumping on floating logs and then on to the backs of swimming turtles. Fall off, and funny frog that you are, you drown.

Although Hopper does not attempt to challenge your mental capabilities, even six years after its initial release it's still a very enjoyable test of your reflexes.

Hunchback is, like Hopper, an antique given a chance to entertain a new generation. You play Quasimodo, the hunchback of Notre Dame, trying to storm the castle in which Esmeralda is being held prisoner. The castle is on eight levels and you must swing, jump and run to find your true love.

Moving on to Sam 7, Firetrack is probably the ultimate shoot-'em-up. It features amazingly smooth vertical scrolling arcade action that starts gently and speeds up at just the right pace until only the best stand achance of surviving for more than a few moments.

The graphics are stunning and give an amazingly realistic 3D effect. What is more, for anyone who can spare the concentration, a number of familiar shapes and features are designed into the landscapes - a Pac-Man chasing power pills, the number 42 and many more. However, I had to be told about their existence - I was too busy trying to avoid the squadrons of enemy ships swirling around me in weird and wonderful formations.

Firetrack takes the ever-popular concept of a shoot-'em-up, transfigures it and implements it faultlessly.

In Bonecruncher, you play the unlikely part of Bono, a little green dragon which lives in a castle by the sea. You have set up Bono's Bathing Company making skeleton soap - a commodity much prized by the monsters which bathe in the moat. The soap is made from skeletons collected from around the castle and boiled in your cauldron.

However, the castle is anything but safe. Not only are there trapdoors through which you would disappear without trace but some skeletons haven't stopped moving yet and they are deadly. Another hazard is posed by giant spiders that rush around the walls biting any hapless dragons in their path. They will also eat any bones so it's often a race to collect the skeletons before they do.

Finally come the Glooks, large white creatures which love the smell of soap. When you have climbed up a stairway to supply another customer they move in the direction faced by the stairs. Although a Glook is not in itself harmful it will crush you if you get in its way when moving. Either that, or you find the way forward blocked.

However you can push one, or take advantage of its movement, to suffocate monsters and turn them into skeletons. Fortunately, Bono's Bathing Company is not a one-dragon show. Your partner Fozzy is strong enough to hold monsters and spiders atbay, but he's not very bright. Always keep an eye on him to make sure that he is not trapped or wandering round incircles. When I first reviewed Bonecruncher in March 1988, I thought it would delight game players of all ages - and I see no reason to change that opinion.

Snapper, Acornsoft's implementation of the ever popular Pac-Man, was the very first game ever released for the BBC Micro.

As Snapper you scour a maze, chomping all the dots. Pursuing you are four bug-eyed baddies that initially follow pre-programmed paths but before very long begin to converge on you.

Fortunately there are four power pills, one at each corner of the maze, which when munched give you a limited period of invulnerability. The baddies now turn blue with fear and you can eat them for extra points. But you must strike quickly, for the effect soon wears off.

I see Ghouls as the only disappointment. Although popular in its heyday, it falls well short of the other offerings' standard. It's a very basic platform game, similar in design to Manic Miner. However, Ghouls features none of its finer touches - the graphics are crude, the keyboard overresponsive and the gameplay leaves a lot to be desired.

Like Manic Miner, Ghouls features a number of levels but the only real difference between them is the layout - the graphic features seem identical from one screen to the next.

The sound effects are quite good - particularly when you lose a life. It also features a lively piece of music that plays when you complete a level and a haunting melody while waiting for you to enter your name on the high score table.

Ghouls may appeal to dedicated fans of platform games, but so many better examples are available that it must be considered a makeweight for the three real stars of this compilation.

Games from both the dim and distant past of the BBC Micro, as well as fairly recent offerings.
Logout