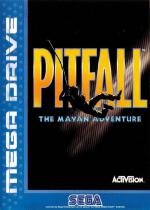 Pitfall Harry has an identity crisis - he things he's Indiana Jones. Then again, you can't really blame him, considering how closely his life mirrors that of the big screen hero. He's big and tough, he carries a whip and wears a battered leather jacket (but not a hat!). And, guess what, his Dad has mysteriously disappeared, just like Sean Connery did in The Last Crusade. Intriguing and some might say uncanny, really.

It's down to you as Pitfall Harry Junior to track down your Dad - using your superlative survival skills to make your way through the Mayan jungles, taking on denizens and undead creatures that cross your path - just like Indiana Jones did in The Temple of Doom really.

Okay, okay, so we're guilty of being a bit cynical here, and there's no justification really, because Pitfall: The Mayan Adventure is a very decent and highly enjoyable platformer - as you shall discover, when you read this top-notch review.

Owes as much to the Indiana Jones trilogy as it does to the original Pitfall game released in the early Eighties.

Run around the platform levels collecting weapons, duffing up meanies and making use of the many background features.

Did you know that the Pitfall Harry seen in the early Eighties Pitfall game is, in fact, the Pitfall Harry Senior who's missing in this game? You adopt the mantle of Harry's son, who just happens to be incredibly athletic. Running and jumping come naturally to this guy, as does a bit of good old fashioned on-the-stomach yomping. Harry Junior is also a master of the whip, which comes in handy for dealing with the enemy sprites. Other weapons such as smart bombs and boomerangs are also available for use against Harry's foes.

There's no denying that Pitfall: The Mayan Adventure is a beautifully-crafted game in terms of visuals. It should come as no surprise to learn that the graphics and animation are the work of seasoned Hollywood professionals, Kroyer Films, whose projects include the award-winning Fern Gully.

One of the best things about Pitfall is the level of interaction with the background. Look out for mine cart racing, Tarzan-esque vine swinging, spider-web trampolining, mystic idol springboard propulsion - and a lot more besides.

The music and sound effects on Pitfall are superb, with loads of decent sampled effects and a frankly stunning tribal soundtrack. Again, Activision hired top-notch Hollywood talent for this area of the game.

Soundelux Media Labs handled the sonics, and they're responsible for films like Cliffhanger and In The Line Of Fire - both of which have received numerous commendations for their exciting use of sound.

The sheer amount of platform games, coupled with their high quality of late, made me wonder if there's any room in the market for Pitfall.

However, after a few hours' intensive play, I've come to the conclusion that this is a very good game indeed.

The graphics and sound create a tremendous atmosphere, whilst the gameplay is very rich and varied indeed. The level of interaction with the backdrops impressed me a great deal - and the game is literally packed with different hazards to overcome and skills to learn. In many ways, this would be the perfect Indiana Jones game (and let's face it, the hero is very similar to a young Indy!).

There may be loads of quality platformers about at the moment, but Pitfall is seriously worth investing some money in - it's a very rewarding experience.

"Aye, aye," thought cynical old me. "This is that sod Mowgli in Jungle Book II." But no, for Pitfall contains more variety than Virgin's conversion of the Disney game, and benefits in terms of playability and variety.

Virtually everything in Pitfall's beautifully-detailed jungle can be interacted with, from the springy spiders' webs to bungee snakes, and because of this the game flows incredibly well. Harry Jnr is equally impressive to look at with loads of animation and neat touches, a rather smart touch awaits anyone who reaches his Dad!

Sadly, I'm old enough to remember the first Pitfall and can remember playing it to death on my wood veneer VCS (and it's included on this cart!). Thankfully, Pitfall Harry's legend is more than carried on by his athletic and far more impressive son. Superb!

Graphics 91%
P. An excellent range of decent backdrops, along with some superlative animation, particularly on Harry himself.

Playability 90%
P. No complaints here. Pitfall is packed with loads of things to see and do. A nice control method adds to the enjoyment.

Lastability 88%
P. Plenty of levels to uncover, with a fair few secret bits as well. Even experienced platforming gamers should find this challenging.

Value For Money 87%
P. The main Pitfall game offers plenty of value, and the inclusion of the old Atari version adds to the package too.

Overall 89%
If you've a space in your collection for a new platform game, this is well worth consideration. Pitfall: The Mayan Adventure offers loads of excitement and plenty of challenge.

Virtually everything in Pitfall's beautifully-detailed jungle can be interacted with, from the springy spiders' webs to bungee snakes, and because of this the game flows incredibly well.